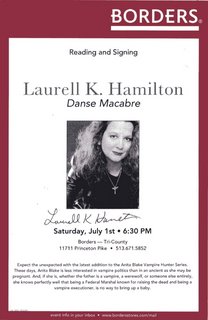 During all the years I worked in bookstores, we, of course, were involved in a lot of book signings. From big name authors to big name celebrities who had a (probably ghostwritten) book out, we had ‘em all. Richard Simmons and Skeeter Davis needed security. James Alexander Thom brought his dog (actually Skeeter did, too!). Another, who shall remain nameless here, brought his manager/wife which was pretty much the same thing. Last night, though, I went with friend Kim to see her favorite author, Laurell K Hamilton, and I was very impressed. Laurell K, in case you aren’t familiar with her, created a character named Anita Blake in the 1993 book GUILTY PLEASURES. Described a bit inaccurately as an R-rated BUFFY THE VAMPIRE SLAYER, Anita’s world is one in which vampires not only exist but have been granted certain rights by the Supreme Court. She starts out in the first book as a Chandleresque character who kills wayward vampires and also reanimates dead folks for legal issues. Just as you think that’s the direction the series will progress, it slowly evolved into a fascinatingly bizarre and unique multi-level, psycho-sexual exploration of dominance and submission in which Anita, while somehow remaining a strong female character, simultaneously becomes almost a plaything of the dark side.
Okay, that’s Anita. Why was I so impressed with Laurell K Hamilton? She was great. After the usual announcements as to what she would and wouldn’t sign and what to expect, she entered (with her husband, Jon) to fanatic applause from the crowd of about 200 that had gathered for several hours to see her. Dressed in black with a grinning Cheshire Cat shirt, she immediately owned the room and began working the crowd like a rock star author. Straight to the Q and A, she was funny, informative and sometimes philosophical as she strutted around in front of the table they had set up for her, occasionally handing off the mike to John for certain specific questions about the upcoming comic book adaptation. The crowd was a mixed bag from middle-aged women and thirty-something men with strange beards to teenage wannabe Goth chicks with a few "normal" folks thrown in for contrast and she treated every question, no matter how fannish, repetitive or complicated as important. After the questions thinned out she began signing in groups of 25. My friend was # 86. 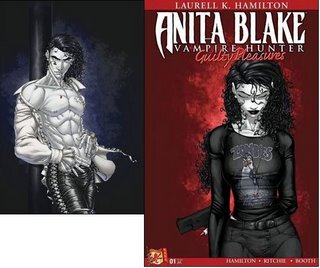 When she got there she showed Laurell and John the rose tattoo on her back that was taken from the cover of Hamilton’s CERULEAN SINS. Then we went out for dinner. She was so excited and said she’d love to meet her again. Before we left the area, we decided to go back. Sure enough, she was still at Borders signing nearly four hours after her arrival. This time, I got to speak with Jon about the upcoming ANITA BLAKE comic book and my friend spoke more with Laurell. Kim had been having a bad day (to put it mildly) and Laurell K just made it all go away. All the way home Kim was like a little kid returning from a day at the amusement park. She even called my wife (also a Laurell K fan but not feeling up to attending) on her cell phone as I drove to gush about how great a time she had. If you’re a fan of Ms. Hamilton, she puts on quite a show. Unlike a lot of authors I’ve personally worked with, she knows her audience and she clearly appreciates them. Watch for her at your local bookstore. She even has a great website here: Laurell K. Hamilton. The comic book adaptations are due to start appearing this month from Dabel Brothers with art (Anita and vampire master Jean-Claude seen here) by Brett Booth. Check your local comic shops.
Posted by Booksteve at 12:00 PM