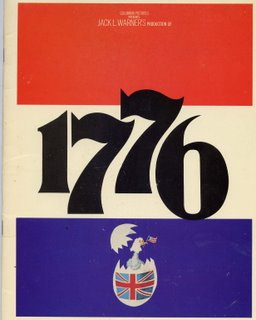 (Today's images from the original film and Broadway souvenir books are courtesy of That Man DEREK on loan to the Library.) Growing up, Independence Day always meant a vacation or a visit to the amusement park. As I got a little older, those vacations often included comic book conventions. At this late date, the words "vacation" and "amusement park" have long since been removed from my vocabulary and the words "comic book convention" removed from my budget. The one Fourth of July constant for the last two decades has been 1776.
I paid little attention to the film when it first came out (which is surprising as I was even then a history buff) but a few months later, our school arranged to bus several hundred students to the Carousel theater in Cincinnati to see it. The Carousel at that time housed the largest curved Cinemascope screen in the state of Ohio—about on a par with the current IMAX screens as I recall. Having ignored the film until then, I had little idea of what to expect.
Yes, the feature version of this Broadway show is little more than a slightly opened up stage production but keep in mind that the only stage musicals I’d seen up until that point starred third graders. I just loved this movie! I was immediately won over when I recognized TV’s CAPTAIN NICE, William Daniels, as John Adams. I told all the other thirteen year olds around me but their memories apparently weren’t as good as mine. As the film progressed, I became enamored of Howard Da Silva’s lighthearted Franklin and Ken Howard’s somewhat Byronic Jefferson. Da Silva, I would find out later, was a major player in the Communist 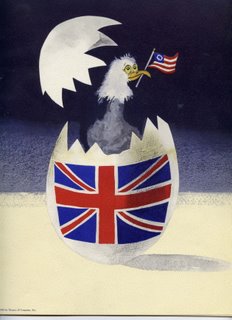 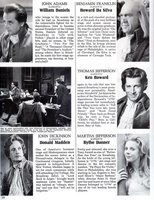 witchhunt of the fifties and thus a supremely ironic choice to play a founding father. Bet that got J. Edgar Hoover’s girdle in a bustle. Howard would go on to TV and stage stardom, sometimes even taking movie wife Blythe Danner (Gwyneth’s mommy) along for the ride. Daniels would, of course, become a disembodied voice playing second fiddle to the ever-popular David Hasselhoff on KNIGHT RIDER.
Complaints? Well, the film’s too long (even with the scene cut that was later restored on the DVD), too setbound and stagy and perhaps worst of all, even though much of the dialogue is taken from historical documentation (Adams’ letters, 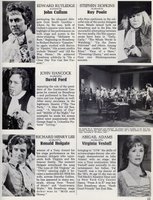 Franklin’s writings, etc) schoolkids from that point on, once having seen this movie, will come to honestly believe that there were show tunes involved with the founding of our country! Seriously, to this day I cannot see a serious representation of the signing of the Declaration of Independence without thinking in my head "Siddown, John! Siddown, John! For God’s sake, John, Siddown!!"
My wife turned out to be a big fan of the show also and, in fact, spent years tracking down the soundtrack album to the film. We now have not only that album but the original Broadway cast album and several CD versions including the relatively recent Brent Spiner version. Heck, I even bought Charlton's comic book adaptation (by Tony Tallarico) which uses the song lyrics as dialogue and even manages to get "hell" and "damn" past the Comics Code!Every year since we’ve been together, we’ve watched the movie. This year, as in the last few, our son has enjoyed it also. He’s going into the fourth grade this year and they’ll probably be studying the Declaration soon. I sure hope his teacher understands when he suddenly bursts into song and tells her that John Adams was "obnoxious and disliked." 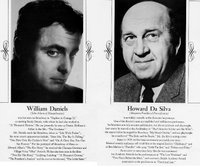 Although certainly not a real sequel (nor even a musical) I recall seeing a PBS (I believe)production in 1989 dealing with the framing of the Constitution and featuring Craig Wasson as James Madison. A MORE PERFECT UNION: AMERICA BECOMES A NATION revisits many of the same characters and could effectively have been entitled 1787! Be nice if they’d show that one every year, too.
History has made all of the Founding Fathers larger than life and all of the New York Times bestsellers that do their damndest to try to humanize them seem to miss one little point. Maybe they really were larger than life! I like to think that at least old gout-ridden Franklin was not above bursting into song on a moment’s notice. I like to think that no matter how human these men really were, there was something just a little special going on in 1776.

Posted by Booksteve at 8:56 AM