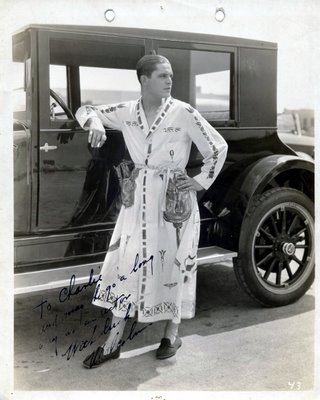 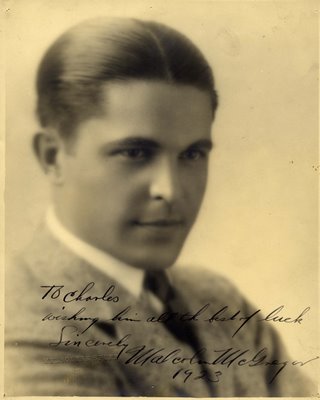 Here are the other two signed photos I mentioned yesterday. My friend would like to know if any collector would be interested in purchasing them (or, in fact, the Dick L’Estrange one from yesterday). If so, feel free to make an offer and I’ll pass it along to her. Signed to her relative, Charles Hammond, these are of Malcolm McGregor, a handsome, clean-cut, second or third string leading man of the 1920’s. McGregor’s big break was in THE PRISONER OF ZENDA but his best known role was in ALL THE BROTHERS WERE VALIANT in 1923. He continued working through the mid-thirties but didn’t really survive the change to talkies. His thirties roles were mostly secondary and in lesser films. He finally left show business and reportedly died of burns received during an accident at his home.
Posted by Booksteve at 7:48 AM