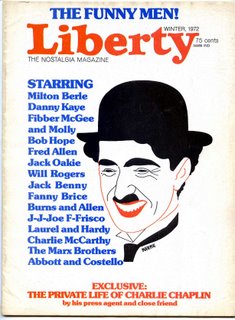 In an effort to make a little money off of that ever-popular early seventies nostalgia boom, the folks who brought you NATIONAL LAMPOON (and later HEAVY METAL) decided to revive the long-running but long gone LIBERTY magazine. Subtitled "The Nostalgia Magazine," this LIBERTY featured very little new material, reprinting instead a selection of articles from the magazine’s original run in the first half of the twentieth century. Perhaps their worst decision from a marketing point of view was to do theme issues, collecting vintage 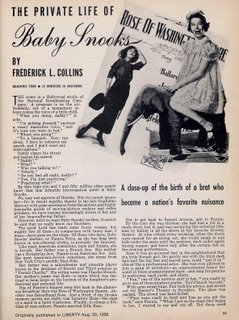 writings on politics, music, comedy, crime, etc. This meant that if you were interested in Benny Goodman but not John Dillinger, you would buy one issue but not the other. If they had tried a little variety in each issue, perhaps they would have lasted longer. Still, then we wouldn’t have the rare treat that is this issue on "The Funny Men."
The articles here, as in every issue, are literally facsimile reprints shot directly from the vintage pages of the originals. Nostalgically, this is interesting, especially with the antiquated conceit of listing the "reading times" for each article. It does, however, lead one to question the validity of some stories as, in those days, press agents often simply made things up for magazines.
Along with the extra-long Chaplin cover story, the laugh-getters featured in this 1972 issue include Fred Allen, Robert Benchley, Fanny Brice ("Funny MEN??"),

Fibber McGee and Molly, Danny Kaye, the Marx Brothers, Will Rogers, Milton Berle, Edgar Bergen and some—but not really all—of the rest of

those mentioned on the cover!
Although LIBERTY also ran reprints of classic ads, to me, the funniest piece in this entire issue is this full page 1972 ad for Dollar a Day Rental Cars! Note that gas is included! Such a deal. Talk about nostalgia.
Posted by Booksteve at 9:03 AM