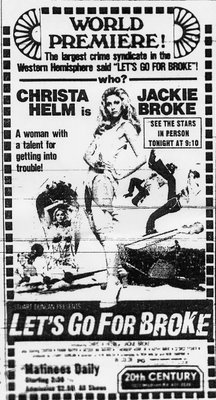 Well, I finally got to the real library today to research Christa Helm but, seeing as how it’s in the middle of a busy downtown, I was hampered by having to leave every hour to feed the parking meter a block away (a spot I was lucky to get at all in midday!). I started by checking their newspaper index which got me exactly nowhere. This meant hit the microfilm with what little I knew of the dates and start digging. "What little I knew" in this case was that Christa’s only strarring film, LET’S GO FOR BROKE premiered at the 20th Century theater in Cincinnati in 1974. Since it certainly seemed like a summer movie, I began my search in May.
Each microfilm reel covered about ten days. Before long I developed a pattern: I would check the front page for the index, find the Entertainment page, check what was playing at the 20th Century, then skip to the last part of the microfilm and check the same there. I did this all through May, June, July and August. After checking on the car again, I then hit September, October, November and December. I was just about to convince myself that I must have had the year wrong when suddenly I found the ad for LET’S GO FOR BROKE premiering on Christmas Day, 1974! Expecting to find some additional information, I scanned the Entertainment sections for days around there but there was nothing. No little publicity plant about the World Premiere, no photo story of the Premiere, not even a damned review of the picture! Sheesh! I knew the Enquirer’s film critic around that time was not a big fan of low-budget pictures but still, it’s a frickin’ World premiere, y’know?
Some observations I did make include the fact that Cincinnati may well have been chosen for the Premiere just because it was a trendy thing to do that year. It had started with BILLY JACK. That film had flopped on its initial release so star Tom Laughlin bought (at least some of) the rights back and re-issued it in a process called "four-walling." Essentially, he bought out the theaters and ran a saturation marketing campaign on radio and TV. BILLY JACK went through the roof! By summer of 1974, they had even re-released BORN LOSERS, the original Billy Jack movie and made that a big hit. 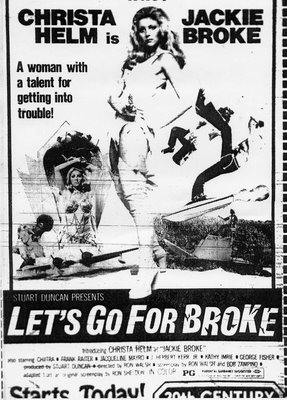 HOMEBODIES, a black comedy horror movie about murderous senior citizens also had a world premiere in Cincinnati that Summer. It had been shot in the city with a cast of familiar septuagenarian faces including Paula Trueman, Ruth McDevitt and Ian Wolfe. For a low budget no star picture, it did pretty well.
Thus, the producers of LET’S GO FOR BROKE may well have just have been trying to take advantage of Cincinnati’s lucky record by four-walling the 20th Century. Some credence is given to this theory by virtue of the fact that the 20th Century ads leading up to the premiere say "All seats $1.25" and for the premiere itself the ads specify "All seats $2.50, this engagement only."
The library microfilm doesn’t copy very well as you can see (and it isn’t cheap anymore either!) but I did get a couple slightly different copies of the ad we’ve run here before, one with "Starts Today" and the "World Premiere" topper and the other from three days later, Saturday night, with the "Meet the Stars" box. We know Christa was there because my friend Mike S posed with her for a picture but not sure who else.
Another factor that may have squashed local coverage is that Cincinnati broadcasting legend Paul Dixon died that weekend as did show-business legend Jack Benny. I say "may have" because they both seemed to get a bit shafted in the coverage they deserved, also.
I was out of money for the meter by that point so I couldn’t check how long the exclusive engagement ran. I also didn’t have time to check for any coverage of Christa’s death a few years later. The fact that it didn’t turn up in the index, though, does not make it sound promising. There is a second major newspaper in town. I’m not giving up. Next time, I’ll try it. I was disappointed but I didn’t come back completely empty-handed. I’m not giving up until Christa gets her due.
Posted by Booksteve at 7:09 PM