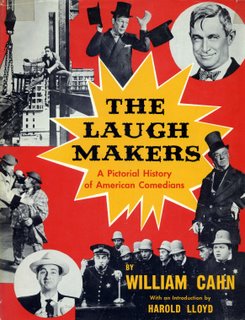 When life kicks you in the teeth, one of the most important survival mechanisms is to maintain your sense of humor. I can testify that it isn’t always easy. I have always loved comedians , though, and just reading about old friends has helped tremendously. Today, we offer a look at several nice books about great comedians.

THE LAUGH MAKERS by William Cahn is the earliest, having been published in 1957. It’s off to a good start with an introduction by silent film legend Harold Lloyd. Then it offers a rather scholarly overview of the history of clowns, minstrel shows, vaudeville and burlesque with rare photos of comics rarely covered in these type of books. Radio shows and silent movies get good coverage as do the early television comedians like Sid Caesar.

Leonard Maltin’s 1978 book THE GREAT MOVIE COMEDIANS offers the now celebrated author’s usual thorough job on a chronological history of comedians from silent days up through Woody Allen. One can argue possible omissions but each chapter present offers a nice look at the funniest of the funny men and women throughout film history. There are also thorough, annotated filmographies at the end of each section.

JOE FRANKLIN’S ENCYCLOPEDIA OF COMEDIANS by the legendarily quirky talk show host (who knew most of these folks personally) came out in 1979. The bulk of the book is an A-Z listing with brief career overviews and biographical bits. The folks covered in this one include a number of stand-up comics who never really appeared that much on TV or in films. Tom Dressen is a good example. Tom would turn up from time to time on talk shows and always made me laugh. Most of the time, though, he spent headlining in Vegas or opening for guys like Frank Sinatra. I ran into Tom in downtown Cincinnati one time when he was in town with Frank. He had just exited a restaurant and 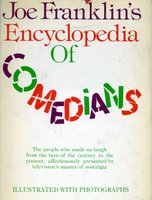 was putting on sunglasses. I think I startled him when I said "Hi, Mr. Dressen" and just walked on, not wanting to bother him. Allan Sherman, Roger Price and the Weire Brothers are amongst other favorites touched on by Franklin but rarely found in other books of this type.

Barry Took, himself a comic in the UK, came out with

COMEDY GREATS in 1989. This one is another alphabetical listing although it offers separate chapters on funny ladies and British comedians along the way. The main attraction here is that full chapters are devoted to Peter Sellers, Jacques Tati, Tony Hancock, Dudley Moore and Barry Humphries (who, as Dame Edna, never fails to make me laugh! I couldn’t afford to see "her" when she was on an extended run in Cincinnati a couple years ago though. Sigh).

The most thorough of all of these enjoyable volumes of comedians is easily QUINLAN’S ILLUSTRATED DIRECTORY OF FILM COMEDY ACTORS. This UK book offers more than 300 pages of alphabetical tiny print articles (to squeeze more in!) on famous and lesser known comics. As you can imagine, this one doesn’t just cover the A list. Featured in the pages of 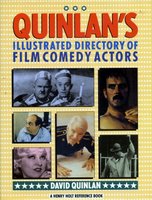 So the lesson learned is that if life gets you down, read about people who make you laugh. Better yet, watch a movie or TV show with them in it!
Posted by Booksteve at 6:23 PM