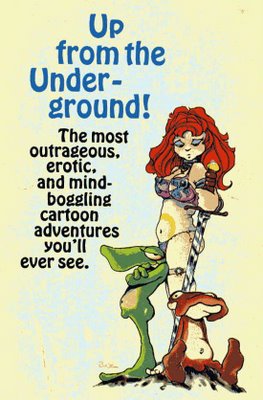 I note that Vaughn Bode was voted into the Hall of Fame at Comicon this past weekend and it’s about time. Bode died under unusual circumstances in 1975 ( In those pre-Net days, this TBG obit was the first most fans saw)

just prior to attending that year’s San Diego Con. His cartoon in the souvenir book had his character Cheech Wizard saying that he would be undercover at the con. "I going as a wad of phlegm," to be exact. Vaughn Bode had been reinventing himself as a self-styled "cartoon gooroo" for several years, becoming more and more flamboyant and depicting himself in his own strips as a messiah figure. His gentle hippie surface persona was often belied by the unapologetic violence, abusive language and seemingly misogynistic feelings toward women in his comics. More and more, they had become a stark social commentary reflecting less than admirable aspects of the culture and counterculture. They were uniquely HIS comics. With an unusual, almost animation-like style that took little from other comics artists, Bode had taken an unusual route to the Underground. He, in fact, had started out in the mainstream, doing a children’s book and science-fiction book and magazine covers. He even had a long running strip (sometimes with Berni Wrightson) in the men’s mag CAVALIER. His signature comic strip, CHEECH WIZARD, had begun as an all-ages adventure in college before developing over time into the debauchery for which it became famous in NATIONAL LAMPOON. Meanwhile, with COBALT 60 and JUNKWAFFEL, Bode became arguably the most recognizable Underground artist after Crumb. Like Crumb, he even bounced 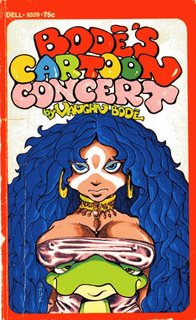 back into the mainstream with the paperback seen here, BODE’S CARTOON CONCERT from 1973 (sold to me at age 14 by some progressive hippie booksellers) which cashed in on the popular slideshow presentation of the same name which he had begun presenting at various
comic conventions.

He was clearly a work in progress, a fact made amazingly clear by a posthumously published self-written piece in Steranko’s MEDIASCENE that would unknowingly serve as his own epitaph. Dated June, 1975, a month before his death, it has been called the ramblings of a drug-crazed idiot but I find it an utterly remarkable stream-of-consciousness look into a troubled but searching psyche. For three full tabloid sized pages, "Da Bode" goes on at length about magicks and light and life and enlightenment using run on sentences, sentence fragmants, random capitalization, unfinished thoughts and purposeful misspellings. His language varies from that of the gutter to that of the pulpit. This was a most bizarre but incredible thing to have just after the man’s passing. 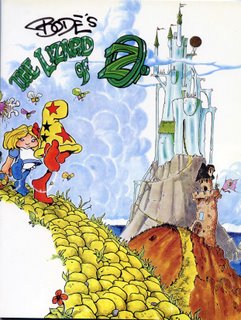 Over the years, Bode’s relatively small amount of work has remained in print in several formats but his real legacy has been to the graffiti artists. To this day, watch any freight

train passing at a crossing and you’re likely to see a "Bode Broad" or lizard or even Ol’ Cheech! In 2004, in a nice tribute to his father, Fantagraphics published Mark Bode’s full color graphic novel entitled THE LIZARD OF OZ, based on a poster Vaughn had done (and which is used as its cover). Something was missing, though. The art style is similar and the writing is equally perverse but it’s all done in loving homage. It ain’t da original. It ain’t da Bode! After all, other cartoonists may be good but Vaughn Bode’s a Hall-of-Famer! 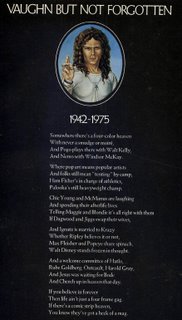 Posted by Booksteve at 8:43 AM