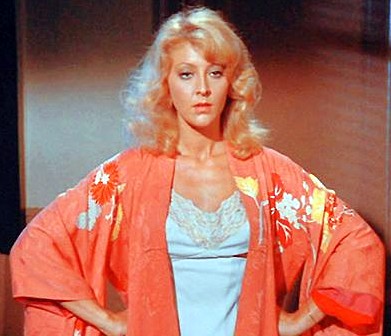 Success! Finally we hear from someone who actually saw LET’S GO FOR BROKE (and has a remarkable memory)! At my request, an anonymous reader who saw the film not once, not twice but THREE times during its two week Cincinnati run here offers a summary /review for any and all of us "lost movie" buffs. Our reviewer also speculated that the "George Fisher" who appears in the film is actually the great Brock Peters (whose real name was George Fisher). While this certainly seems tremendously unlikely as Peters was at a career peak at the time (he starred in the American Film Theatre’s LOST IN THE STARS that year) I’m hardly in a position to rule it out until somebody shows me the movie itself! Stranger things have happened. Mr. Reviewer, the floor is yours, sir, with our thanks!
LETS’ GO FOR BROKE-A Review
With its theme of white slavery/kidnapping, LET’S GO FOR BROKE definitely had some common ground with the GINGER movies. While GINGER qualifies as soft core porn, though, LET’S GO FOR BROKE was a PG film, just kinky enough to hold my interest, with star Christa Helm appearing in a variety of costumes.
LET’S GO FOR BROKE had some plot devices that were very similar to the James Bond film LIVE AND LET DIE including the voodoo stuff and even an airboat chase. While it was obviously a C film (wannabe B), I still find it hard to believe it was done for only a million bucks, even then.We meet "Pierre Bulova", a wheelchair-bound eccentric who is supposed to be some kind of "dog food tycoon". He is visiting an elderly professor type who is supposed to be developing a synthetic (genetically engineered?) dog food. He brings out a dachshound named, interestingly enough, "Milhous". Hey it was 1974... well, Milhous goes for the dogfood substitute, but then suddenly turns into a dog-shaped blob of raw hamburger. Of course the professor is horrified and proclaims his product a failure, but the evil Bulova of course sees it as a weapon. I don't remember if he kills the professor to get the formula or what, but that part of the plot gets shelved for a while.We also meet a tall blonde reporter named Jaqueline Broke. She is interviewing a self-proclaimed "feminist" named Pepper Carroll. Neither of them much look like Gloria Steinem, but - that's the story. Pepper lights a cigarette and her lighter flames up, and she mumbles something about a defective regulator. Well, meanwhile - the thug squad of Chiitra (a woman with a thick accent who looked a bit like Erykah Badu), Andre,and Kimo set out to kidnap Pepper Carroll and ship her off to Haiti -having targetted her after seeing her on TV. In a scene very reminiscent of the abduction of "Carter Winston" in THE ABDUCTORS, Andre and Kimo crash Pepper's apartment where she is in her feminist nightie. They grab her and she proceeds to kick the shit out of them for a few licks, before finally being subdued and knocked unconscious. We next see her being carried (rolled up in a carpet Ithink) on board a small boat. She is dumped out on deck, now in a bikini (ooh, they changed her while she was knocked out!) where she once again puts up a fight before being knocked out again.Andre then schmoozes his way into a dinner date with Jackie, on the premise that he is a representative for the Haitian government. During the dinner, he deliberately pulls out Pepper's defective lighter, which of course flames up again. So Jackie knows he's involved in Pepper's disappearance, but she doesn't know she's being set up. I think what happens next, or shortly after, Jackie gets drugged and then spirited offto Haiti.Around this time one of Jackie's co-workers, a bald guy named "Lenny" is worried about her and calls Detective Eddie Egan - who actually is going by his real name. 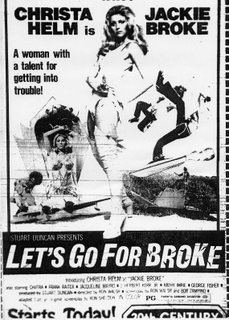 So, in Haiti Jackie ends up tied to a giant paper mache' cobra with her hands over her head (the picture in the newspaper ad). But the newspaper photo has been doctored to not show the bonds on her wrists and insteadplaces a gun in her hand - which I don't think ever happens in the movie.She gets put into a voodoo trance of some kind by Chiitra, and thus becomes a compliant slave girl like all the others. This brings us to the best part of the movie... Bulova, the guy in the wheelchair, is ofcourse the mastermind of the kidnapping racket, but he also reports, as do the other, to a mysterious "Mr Z". He's on the deck of his boat, with Jackie, who is dressed in a glittery cross between a matador costume and a belly dancer outfit, and she is playing with him on the deck -- wavinga cape at him as he charges her in his wheelchair. Sometime during this sequence, the voodoo spell gets broken - I forget how. She comes to her senses just as he is charging her. I think she looks the absolute best in this scene, smiling at him with her red lipstick... she coaxes him into charging at her cape, which she yanks out of the way and he proceeds to go overboard. Jackie tries to make an escape but is quickly corneredby the other thugs on board, including Bulova's lovely Asian assistant.To "punish" Jackie, the Asian girl has her tied to this rotating stake,with little targets painted on her, while Bulova enthusiastically shoots at her "pleasure centers" with some kind of ray gun thingy. At some point during this process, Bulova gets distracted and leaves the room. When he returns, Jackie is gone and the Asian girl is now tied to the stake - and gagged - in her long blue dress, rotating back and forth like a washing machine. We don't see how Jackie escaped, we just see her boarding a pontoon plane- which I think is tied up along side the boat. She takes off in the plane, but soon runs out of gas and ends up caught yet again. And I think this time she has actually made off with the dog food formula.At this point I don't remember the sequence but, there ends up an airboat chase and Kimo buys it when his boat explodes. At the end, she is back again with Bulova - I think Chiitra ends up being bitten by her pet cobra and dies. Then Mr. Z is revealed to be Bulova's (non-wheelchairbound) twin brother Horace, the real mastermind. And somewhere in all this, Bulova ends up ingesting his own evil dog food formula and he himself turns into a giant pile of hamburger. I think the finale is Jackie walking away, free (having freed all the other girls) and she runs into the one remaining bad guy - Andre. The only one she hasn't been able to successfully fight. He challenges her next to an empty swimming pool, and she graciously accepts, but first insists on "the ceremonial bow". Andre bows, and Jackie kicks him square in the face where he plummets into the pool. Like I say, not sure of the sequence of events at the end but Christa is really quite stunning, if not a great actress. The brunette that playsPepper looks pretty good too. I actually even remember some of the music. The theme song "Lets go for broke, take a chance on tomorrow" and was actually sung by Christa. Hard to say how it would play today, but I suspect it's better than a lot of "sexploitation" films of the 70s that you can pick up at any video store in the cheap rack.
Posted by Booksteve at 12:04 AM