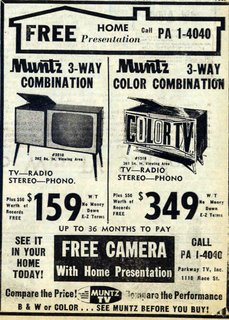 My family never had one of these combination TV-Phonographs but, judging by these ads, they were all the rage in 1965. You could get them in black and white or even in color. ’65 was the last year that any shows of any significance were broadcast in black and white so obviously if you were upwardly mobile enough to get one of these in the first place, color would be the way to go. My family didn’t go color for another three years though so during that period I continued to enjoy everything from BATMAN and STAR TREK to HOLLYWOOD PALACE and HULLABALLOO in glorious black and white. Once we got our first color set in August of 1968, half of the fun was watching old shows and finding out if they were in color. I remember being surprised to find that THE MUNSTERS had never even been in color! 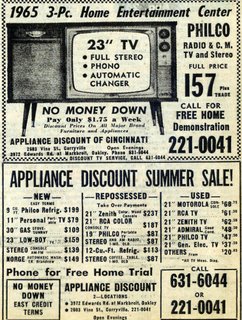 Anyway, in these days of Bradbury-esque plasma TV walls, it’s interesting to see just how far things have come in what amounts to a relatively short amount of time. 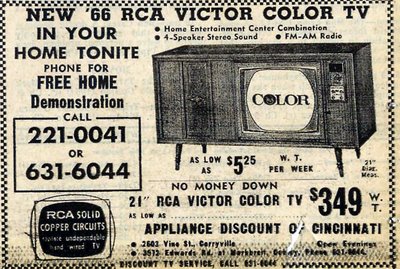 Posted by Booksteve at 8:11 AM