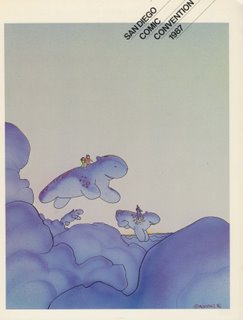 Well, it’s convention time for a lot of my readers and I certainly wish I could attend but no job, no money...you know how it is. It’s been about 7 years since I’ve been to a comic convention and that was just a small local motel con. Back in the day, though, I attended major cons in Cincinnati, Cleveland, Columbus, Dayton, Philadelphia, Chicago, and Louisville. My only time at the amazing San Diego Con was in 1987. I was 28 years old and had been attending conventions large and small for more than a decade by that point but I was still just utterly and completely overwhelmed. I’m told it’s about a hundred times bigger these days!

Standing in a long line behind Art Spiegelman

and Francoise Mouly and their brand new baby until someone came up and told Art that as a guest, he didn’t have to stand in line.


I was supposed to meet my pen-pal buddy John Austin from Spokane at the First Comics table at 1PM on day one but I couldn’t find the First Comics table! Finally I bumped into him on day two and we spent the afternoon hanging out with his buddy, Robb Phipps, a pro guest. This included my very first (and to date only) trip to Jack-in-the Box.


Hearing that Neal Adams showed up unannounced and drew a huge crowd to a small table where he just started sketching. I had to stand on a chair to actually see him!

Being so struck by the fact that Gil Kane looked just as if he had been drawn by Gil Kane that I accidentally bumped into Will Eisner who was talking with Jack Kirby and Doug Wildey (who was wearing a cowboy hat).


Seeing Mark Hamill just strolling around with the rest of the attendees.


Sitting near Bill Sienkewiecz and Frank Miller at the awards ceremony when they had to keep getting up to accept awards. I took pictures but without a zoom I can’t make anybody out.


Telling Mark Evanier that I voted for Jay Endicott (his CROSSFIRE character) as best character in the CBG poll. Mark was sitting with Sergio and Stan Sakai at the time.


Watching Joe Rubenstein give the most interesting talk I’ve ever heard from an artist at a convention including an explanation of Kirby powerdots.


Taking (and taping) a voice-acting seminar with June Foray and then discussing my projected book CARTOON CHARACTER ACTORS with her afterwards.


Watching black and white SUPERMAN episodes in a small upstairs room with a group of about thirty fans, all of whom were surprised when the lights came up and Phyllis (Lois lane) Coates and Robert (Inspector Henderson) Shayne had snuck into the room along with a giant SUPERMAN 50th Anniversery cake that we all shared.


Finding out Robert Shayne was staying in my hotel and having several elevator rides with him.


Seeing a display of SUPERMAN memorabilia including George Reeves’ costumes.


Enjoying an hour or so of


Buying rare undergrounds including AIR PIRATES FUNNIES from the artists themselves! 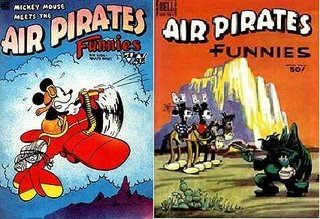 
Passing up "An afternoon of hellfire and brimstone with Harlan Ellison" to attend a small, intimate gathering with George R. R. Martin, then the producer of TV’s BEAUTY AND THE BEAST and coordinator of the WILD CARDS books.

Having a whole separate suitcase full of books, mags and comics to take back with me.


I wish I hadn’t been so shy. It comes and goes with me. It was all just so big that I really didn’t talk too much to anyone. I wish I had. I could have actually met Jack Kirby instead of nearly knocking him down! I wish I’d taken better pictures (so I could run some here now!) I wish I’d seen more panels, more talks, more presentations. If you’re going to Comicon International ( See Welcome to Comic-Con International: San Diego!) later this month, that’s my advice; Speak up! Talk to people! Like my then-co-worker/now-wife said to me at the time, which I guess in retrospect I ignored, "How’s anyone ever going to learn how great you are if you don’t even say "Hi"?
Posted by Booksteve at 9:28 AM