Movies That Fell Through the Cracks # 15 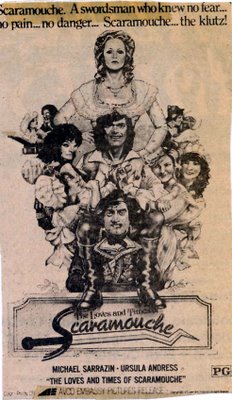 Well, today we have not just a movie, THE LOVES AND TIMES OF SCARAMOUCHE, but an actor who seems to have fallen through the cracks. Unlike just about anyone who ever set foot on a soundstage, Michael Sarrazin has no real web presence-- no unofficial homepage, no yahoo fan group, and very little info about him on IMDB or similar sites.
Here’s the thing, though. At one time Michael Sarrazin was a major film star! Seriously! He even dated famous starlets like Christa Helm, seen with him below (and if you haven’t been keeping up, look up Christa in the "Search This Blog" function. We'll wait.) The sad-eyed Canadian actor that looks like his face was flattened with a few blows from a frying pan was not your conventional leading man but he worked his way up impressively until it all just seemed to stop. Oh, he still turns up from time to time, usually with tenth billing and one scene in some obscure international production or TV movie. The years have not been kind to his already less than traditionally handsome face though, perhaps limiting him to the character roles he now plays.
I guess I first saw Michael Sarrazin in EYE OF THE CAT, a 1969 Hitchcockian thriller with little really to recommend but it was so scary for ten year old me that I went back to see it a second time! Soon after, I caught him in 1967’s THE FLIM-FLAM MAN on television and began to take notice. By that time, he was appearing in the prestigious, Oscar-winning release THEY SHOOT HORSES, DON’T THEY? and a string of major co-starring roles followed. This arguably peaked with Barbra Streisand’s FOR PETE’S SAKE in 1974. After that, Michael was poised to get above the title roles. THE REINCARNATION OF PETER PROUD was a high profile horror film released in the wake of THE EXORCIST and 1976’s THE GUMBALL RALLY was a less gimmicky version of Burt Reynolds’ CANNONBALL RUN. Somewhere during this period, though, Michael went to Italy (First Goldie Hawn, then Tony Curtis, now Sarrazin. Is it the lure of a free Italian vacation or what?) and made THE LIVES AND LOVES OF SCARAMOUCHE. 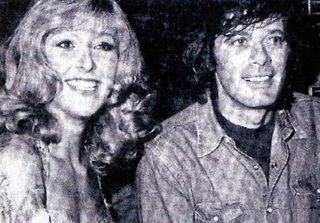 Costarring all-time favorite Bond girl Ursula Andress, the basic plot description seems to have little to do with Rafeal Sabatini’s classic novel SCARAMOUCHE, filmed twice before in the US with a number of European versions as Napoleon Bonaparte appears as a major character and is not credited as such in earlier versions. More than likely, the whole thing was probably an excuse to try to tap into the lucrative comic swashbuckler market created by the success of Richard Lester’s THREE MUSKETEERS films of the seventies.
With no credits in 1977(perhaps in shock after former girlfriend Christa’s murder that year?) Sarrazin was still hip enough to host SATURDAY NIGHT LIVE in 1978 but his career continued to lose momentum from around the time of his Italian excursion and appearances in anything came less and less often. After LOVERS AND LIARS, Goldie Hawn made PRIVATE BENJAMIN and she was back on the fast track. After SOME LIKE IT COOL, Tony Curtis slowly settled into being a living legend. Michael Sarrazin, though, last appeared as of this writing with twelfth billing in an obscure 2005 TV movie. Michael, get yourself a home page and start a cult! We miss your quirky performances. It’s never too late for a second act!
Posted by Booksteve at 8:29 AM