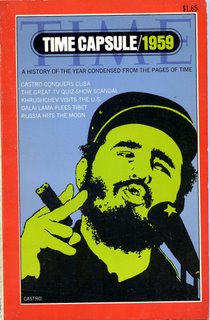 In 1968, TIME put out a series of yearbooks detailing history as seen through the magazine up until that point. The only volume that I have is the 1959 volume but, since that’s the year I was born, that makes it all the more interesting. I don’t really remember 1959, naturally, but my mother always said that my very first words included "Kennedy," "Nixon" and "Playtex." Even at that early age I watched FAR too much television.
Fidel, of course, highlights the cover and there was certainly plenty of social and political upheaval going on that year, none of which falls into the pop culture purview of this blog. It is, however, interesting to note how TIME covered that year’s arts and entertainment.
They mention that TV’s SUPERMAN, George Reeves, was not so invulnerable when he hit an oil slick and was injured in a car accident. They somehow neglect to mention his controversial death that same year although they do note the passing of Errol Flynn, Lou Costello, Fu Manchu creator Sax Rohmer and boxer/actor Max Baer (Sr.).
CBS nixed an already filmed interview with aging sex symbol Mae West as "parts of it might be misconstrued." No mention of the real sex symbols of the day, Marilyn Monroe and Jayne Mansfield or the increasingly explicit films coming from overseas.
The MUSIC section of the book is all opera and ballet even if most of it deals with the gossipy details of diva Maria Callas and her scandalous affair with Aristotle Onassis. There is not even a cursory mention of Bobby Darin, Frankie Avalon or even the DJ payola scandal that toppled Alan Freed and nearly Dick Clark. Did rock and roll exist to TIME? Buddy Holly’s tragic February death, remembered as "the day the music died" is not even hinted at!
On the other hand the TV quiz show scandal (as seen years later in Robert Redford’s QUIZ SHOW) in which popular contestants had been fed answers was big enough to rate a cover blurb and a long recap, perhaps leaving no room for the TV debuts that year of TWILIGHT ZONE, ROCKY AND HIS FRIENDS or even BONANZA which would run in parts of three different decades!
The movie section covers PILLOW TALK, BEN-HUR and THE MOUSE THAT ROARED. I guess it’s unrealistic to expect TIME to even mention the film that was arguably 1959’s biggest contribution to pop cinema, Ed Wood’s PLAN NINE FROM OUTER SPACE!

Beatniks and Hawaiian shirts were big, Barbie made her toy fair debut and Elvis was in the army, none of which gets a mention from good ol’ timely TIME. The problem with books like these, made up as they are of the articles as originally published, is that they do not have the benefit of hindsight. Pop culture rarely was treated with respect in those days, especially in mainstream media. Surely the TIME that put WATCHMEN on its list of all-time greatest books would rethink things. While it’s interesting, if one just looked at history as covered by TIME, one might think it was a pretty dull year in pop culture. I wonder what they said about 1964?
Posted by Booksteve at 8:51 AM