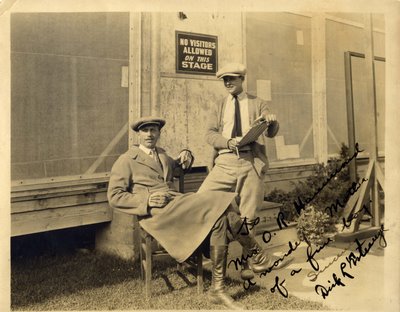 I've been asked by a friend to try to identify several old autographed pictures. According to her family, a relative named Charles Hammond was an actor in the 1920's. IMDB lists a Charles Hammond that MAY be him. That Charles Hammond is also listed as an Assistant Director on Chaplin's legendary lost A WOMAN OF THE SEA. According to my friend, the guy to the right with the clipboard in this shot is Charles Hammond (looking for all the world like an AD). The picture is inscribed to Hammond's mother but who is the other gentleman? A WOMAN OF THE SEA was directed by Josef Von Sternberg. This signature says "Dick ?????" Actor, director, producer? Any of you experts out there have any clues? The other two pictures, signed to Charles Hammond and dated 1923 are signed stills of actor Malcolm McGregor. Him I can find a lot on.
Posted by Booksteve at 8:17 AM