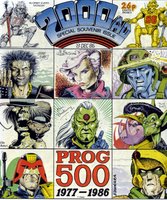 From 1982 through 1987 I was lucky enough to amass an extensive (if slightly incomplete) collection of another comic that reached issue 500, Britain’s long-running 2000AD weekly. Even better, that was a kind of golden age for 2000AD (that name must have seemed so far in the future still!) featuring as it did so many of the "British Invasion" greats just as they were starting to turn up in America. Among the creators found in this run are Alan Moore, Grant Morrison, Dave Gibbons, Pat Mills, John Wagner, Alan Grant, Carlos Ezquerra, Alan Davis, 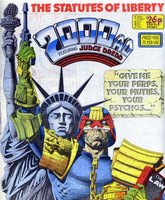 2000AD, of course, was and is the home base for JUDGE DREDD. Backing up that long-running series, however, were a number of equally classic series. In this run alone, these included NEMESIS THE WARLOCK (said to be even more popular than DREDD at one point!), ROGUE WARRIOR, STRONTIUM DOG, ROBOHUNTER and THE ACE TRUCKING COMPANY. Mister Moore cruises through with DR AND QUINCH, SKIZZ, THE BALLAD OF HALO JONES and a bunch of those one-off SF tales we wrote about earlier.

JUDGE DREDD was already iconic at this point having become a song by the Human League (I AM THE LAW) as well as a daily comic strip. A black comedy set in the futuristic Megacity One, Dredd is the ultra-conservative, totally by the book, uber-nazi "hero" who arrests, sentences and/or executes perps for crimes ranging from jaywalking to organ harvesting. Imagine DICK TRACY if Chester Gould had continued along that sci-fi path he took in the sixties! With his cool helmet and motorcycle (depicted quite differently depending on the artist) Dredd is the focal 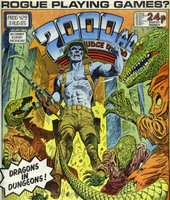 point of the series but often the least interesting character. Longer sagas such as JUDGE DEATH and THE CURSED EARTH open up the series and the world for awhile but it always seems to drift back to being formulaic satire. Of course, if you absolutely HAVE to have something every single week…

All points and angles with a smoking arrow-shaped head, Nemesis the Warlock 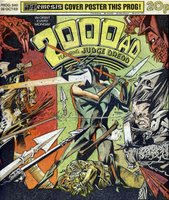 is probably the most outlandish looking alien hero in all of comics. His running enemy is Torquemada as in the legendary Spanish Inquisitor, here trying to bring "purity" to the universe.
Rogue Trooper is a future soldier whose buddies were killed but that’s okay. He manages to keep them alive in memory chips attached, respectively, to his backpack, helmet and gun. As such they continue to kibitz and aid the blue alien soldier in his lonely battles.
Strontium Dog is a derogatory term used to identify mutants. Mutant Johnny Alpha leads a motley crew that includes Viking Wulf Sternhammer and Middenface McNulty. Robohunter is Sam Slade, an old-style detective in a world where everything including his cigar is robotic. Ace Garp 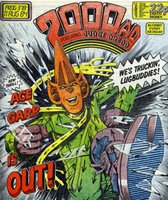 leads an intergalactic "trucking company" through comic misadventures. Other series appearing from time to timeinclude 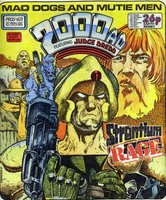 THE MEAN TEAM, HELLTREKKERS and THE STAINLESS STEEL RAT (based on books by former EC artist Harry Harrison).

Another major player in this run is SLAINE. Not a favorite for me, this Celtic Conan became extremely popular in spite of, in my opinion, confusing writing, overly complicated storylines and extremely messy art by Glenn Fabry. SLAINE’s growing popularity, along with the defections of many of my favorite creators, would lead to my eventually dropping 2000AD.

In later progs, we get Grant Morrison’s ZENITH, a unique teenage superhero. I dropped the title during this time but was intrigued enough to continue buying the Titan collections of ZENITH. 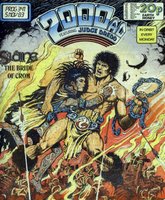 I said, the highlight here has to be watching Alan Moore in his formative years. Already a master of his art, he deftly spins new TWILIGHT ZONE twists on little sci-fi themes, skewers everything with the violent, anarchist DR AND QUINCH (drawn beautifully by Alan Davis!) and then turns right around and offers the fully-realized worlds of SKIZZ (an ET story done better than ET) and Halo Jones (perhaps Moore’s most under-rated strip) with writing miles beyond the "kids paper" field.
The weekly was edited by one "Tharg the Mighty," s zarjaz alien editor with a superiority complex. Each issue, supposedly compiled by Tharg’s various creator ‘bots, is referred to as a "prog" as in computer program. As in the old EC’s featuring Gaines and Feldstein as characters, Tharg appears from time to time in his own lighthearted adventures often lording it over robots based on Alan Moore and others. There were even photofeatures with Tharg! 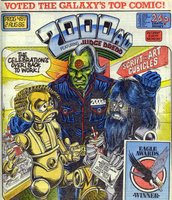 With the success of Moore’s SWAMP THING and the influx of other UK creators into the American market Eagle Comics attempted to present the original JUDGE DREDD and other strips in monthly US reprints. In spite of several attempts in multiple forms (with new and reprinted covers from Brian Bolland!) they never caught on. Could it 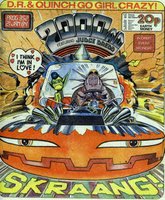 be because the satire hit a bit too close to home?

Eventually, though, with the character’s continued popularity and the eventual feature film, DC Comics bought or licensed at least some interest in the character and teamed Dredd up with Batman a couple of times.
2000AD continues on well into this new millennium although I’ve not seen an issue in years. I had the hardcover annuals until a year or so ago and I still have the Sci-Fi specials, the early 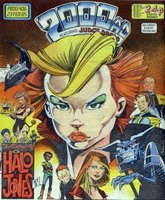 issues of the JUDGE DREDD magazine spin-off and the first two trade paperback collection of daily strips. Hard to find in the US, if you’re at all intrigued, seek out the Titan Books trade paperback collections of JUDGE DREDD, THE BALLAD OF HALO JONES, ZENITH and others for a taste of thrill-power!
In the immortal words of Tharg the Mighty himself, Splundig Ver Thrigg!!
Posted by Booksteve at 11:48 AM