Comics in Other Lands

I used to love it when comic books would stick in a page of comics covers from somewhere other than the US. It was fun to see that other than the language, heroes were heroes everywhere. In gathering up a box of comics to sell earlier today, I came across three

non US comics that I had forgotten I had. The German DC one, in spite of the seeming title on the cover, is actually just called SUPERMAN. Batman is neither seen nor mentioned in the issue that reprints some late fifties early sixties stories with art by Wayne Boring and Al Plastino. Perhaps the 1966 BATMAN series was on German TV at the time and they wanted to sell the comic with Batman even if Batman wasn't in it! The German FANTASTIC FOUR, on the other hand, does NOT mention it on the cover but features ten pages of 1968's DAREDEVIL story "The Death of Mike Murdock" along with the lead FF piece. That lead FF piece, in fact, reprints Jack Kirby's legendary unfinished "Janus" issue of FF.Marvel announced last week that

it would finally be completely finished from Kirby's pencils and

published. The 1973 Mexican SPIDER-MAN, which I purchased in Cleveland of all places, features all new stories and art, not reprints. Spidey has a pretty pedestrian battle with Doctor Doom (most of whose poses are John Buscema 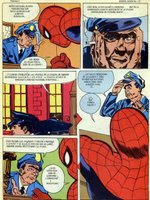 swipes) after chewing the fat with his buddy the cop early in the issue. Huh? Had these people ever read an issue of SPIDER-MAN before? By the way, the running couple who look vaguely like Peter and Gwen Stacy do not appear in the issue at all.
Posted by Booksteve at 3:59 PM