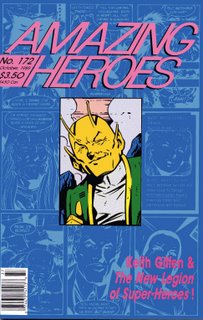 I mentioned yesterday that AMAZING HEROES was the very first publication to pay me for my writing. That was in 1989. Momentary editor Chris McCubbin (now a successful game strategy guide author) was intrigued with my suggested article on Marvel’s PUSSYCAT and we exchanged several letters as I worked and re-worked the piece (ah, if we had only had e-mail!). I must admit that I was actually trying to make back some of the $89.00 I had spent on purchasing THE ADVENTURES OF PUSSYCAT at San Diego the previous year.
I had first discovered the obscure girlie strip back in 1970 in the back pages of my dad’s hidden stash of STAG and other so-called "men’s sweat" mags (which I later realized were a sideline of Marvel’s parent company). At age 11, I found the only slightly risque strip itself not nearly as interesting as the fact that it was obviously drawn by the same guy that did SUPERGIRL and TOMMY TOMORROW! 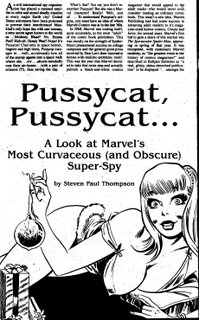 What a comic book geek I was/am!
Ten years later, age 21 and legally allowed to do so, I was paging through a cheap, newsprint girlie mag the likes of which I had never seen before when I suddenly found, much to my amazement, a PUSSYCAT strip! "They’re STILL making this strip!!??" I thought to myself. Well, they weren’t, of course. It was a reprint, a fact driven home by the appearance in the same magazine of Basil Wolverton’s POWERHOUSE PEPPER strip from the 1940’s. In fact, some of the girls seemed to have been photographed in the fifties, too! Lots of stupid jokes, ancient reprinted panel cartoons (some by Bill Ward), murky black and white nudes and silly old comic strips. Who exactly was the intended audience for such a mixed bag of a mag? I, of course, bought it immediately. I only ever found one other issue, though. It had more Wolverton but no more

PUSSYCAT. By 1985, however, I had heard about THE ADVENTURES OF PUSSYCAT, the black and white magazine that came out around the same time as THE SPECTACULAR SPIDER-MAN and reprinted the character’s early strips. Nostalgia, the collective mentality and the male mind being what hey are, I had to have it and I did, in fact, find it at San Diego in 1988.
With art by Wallace Wood, Bill Ward and Jim Mooney and a gorgeous cover by Bill Everett, PUSSYCAT might best be described as LITTLE ANNIE FANNY light. When I wrote the article, I speculated that, because of the bombastic, alliterative dialogue in some of the stories, Stan the Man himself might well have been the writer.

Artist Jim Mooney, in a later published interview confirmed that Stan Lee did, in fact, write at least one but that his brother Larry Lieber wrote the rest of the ones on which the artist worked. Mark Evanier supplied the fact that Ernie Hart, otherwise not working for Marvel, also wrote some of the adventures.
When the issue of AMAZING HEROES with my article came out, I was in heaven. At long last I was a professional writer (and I photocopied Fantagraphics’ check to prove it!). The bookstore where

I worked even stocked AMAZING HEROES and I looked forward to bragging about my piece (pardon the expression). Of course, that would be the issue where our buyers decided to drop it because it hadn’t been selling well. AARRGH! After several frantic phone calls to the regional buyer’s office, I was informed that there were no copies to be had. My local comic book shop had even been shorted on that issue but saved me the only two copies they got. Another nearby comic shop reluctantly agreed to save me all seven copies they had but I had to pick them up by 7 PM that day. I took an hour and a half bus ride to get there (on two buses through three counties in two states!) and made it with about fifteen minutes to spare! On the equally long return bus ride, it occurred to me that I had cornered the local market on that particular issue of AMAZING HEROES so no one I knew locally

could ever glance through a copy and discover my article! Sheesh! And I wanted to be a writer! I signed and distributed a few of the copies I had (including one to my future bride, then simply a friend and co-worker) and began submitting ideas to AH for a follow-up now that I had an established relationship with the editor. The editor? Who? OH, NO! NOT AGAIN! Just like that, McCubbin was gone and the new guy didn’t know me and didn’t seem interested in any of the ideas I pitched. Sigh. Discouragement set in and it would be years before I followed up successfully.
With the rise of the Internet, THE ADVENTURES OF PUSSYCAT cult began to grow. Fred Hembeck wrote a much better piece than mine on the old girl. Wikipedia even has an entry now( The Adventures of Pussycat - Wikipedia, the free encyclopedia) with links to Fred’s piece and even some actual PUSSYCAT stories on the web! Here’s one I haven’t seen anywhere, however, clipped from that 1980 reprint, a holiday tale for a holiday weekend. The closing line of my AMAZING HEROES article said that Pussycat "…can be found these days languishing in a distant 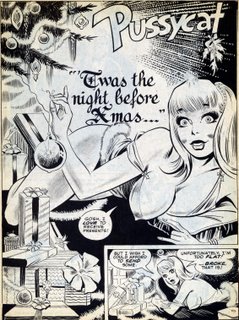 corner of the Marvel Universe, filing her nails as she commiserates with Millie the Model, wondering why she couldn’t have been born a mutant like all of the popular girls." With Millie herself suddenly getting a little reprint respect at Marvel, and Pussycat’s growing Internet fan club, maybe there’s a chance for at least a trade paperback collection! Meooow! 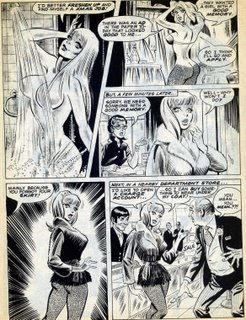 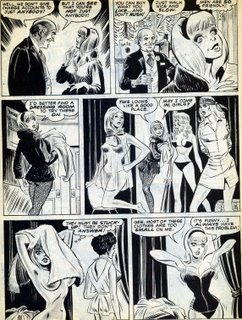 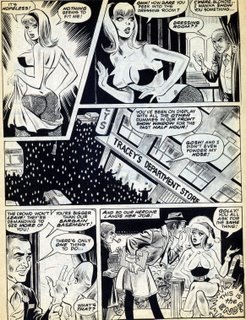 Posted by Booksteve at 9:34 AM