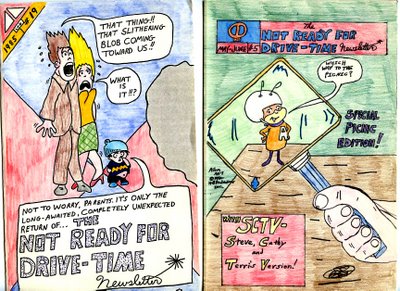 To herald my weekly personal update, here are a couple more examples of the early 1980’s pop trivia newsletter (note the hand-colored covers) that I co-wrote, co-edited and published with my friend Terri.
Well, to be blunt things aren’t going very well. Yesterday I received, amidst other bad news, word that my unemployment claim has been denied. I’ve already filed an appeal but that, of course, will stretch things out even further and still not guarantee that I’ll see anything from it. In the meantime, I’ve posted my resumes in a couple new places this week and applied to about ten more positions. No one is calling me for an interview, however.

Not to sound too bleak but the phone is scheduled for disconnection in about two weeks, the electricity in four. The car insurance is late and the car itself faces possible repossession in 11 days. It ain’t like my Internet service is paid up in advance, either. Thus, I find myself making an appeal. Through all of this unexpected mess, I’ve worked daily and diligently on this blog for your enjoyment and I’ve only ever seen one or two bits of negative feedback. You’ve all been delightfully wonderful! I write and it’s what I love! If you have a writing, editing, ghostwriting or proofreading job for which I might at least be considered, please let me know via email. Below is a portion of my writing, marketing and promotions resume. I have 510 samples right here on my blog but additional samples can be provided upon request. I can research and write for you from Kentucky and I also have a network of experts in other parts of the country (Heck, the WORLD thanks to this blog!) for info as needed.
Experience
Writer/Editor/Promotions
2005-present-Have written/published 510+ articles online at Booksteve’s Library
2002-2006-Wrote/posted 44 short stories/articles/interviews online on various sites
2006-wrote short story published in book IT’S THAT TIME AGAIN 3
2006-Sold article to be published in upcoming book, short story adapted for radio, Canadian reprint rights to short fiction
2005-Edited a chapter of the book STEPPING OUT IN CINCINNATI
2004-2006-Edited and/or ghostwrote fiction/non-fiction for 5 authors
1987-2004-Have written articles published in national magazines
Created/distributed three public and/or in-house newsletters at last job
Rewrote department employee manual and wrote employee guidebook
Designed/implemented employee incentive contests
Designed implemented multiple in-store contests/promotions
Wrote and performed in series of radio commercials
Produced comic strip for district newsletter
Arranged/promoted in-store booksignings/concert with various authors
Wrote marketing manual adopted by local district
Won national marketing contest and featured in company training film
Edited, co-wrote and published 23 issues of a newsletter tied to local radio call-in show
Was head writer and performer with two local comedy troupes
appeared on local television/radio performing self-written comedy sketches

I’m trying hard to keep a positive attitude but days like this make it a little bit harder to do it again and again. I’m starting to think, pessimistically, that the light I saw at the end of the tunnel is that of an oncoming train. Let me again direct your attention to that Paypal donations box at the right of my main page. If you’ve already tipped, please don’t think I’m asking for more. It was GREATLY appreciated, believe me. If not, however, might I suggest that there’s a very real chance that BOOKSTEVE’S LIBRARY might at the very least be interrupted if not closed if I can’t pull out of this soon. If you can, please consider a small donation as we pass the virtual hat once again in an attempt to keep me and my blog afloat a little longer. Please also consider ordering some of our bumper stickers from BUMPS TO PROGRESS. Thanks! I appreciate all of you so much!
Posted by Booksteve at 7:36 AM