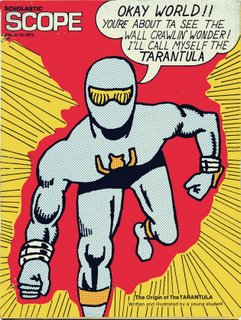 In 1972, SCHOLASTIC SCOPE, one of those high school English class mags, introduced the world to a budding young cartoonist from Washington, DC named Elvis Murray and his superhero creation, the Tarantula. Elvis was a fifteen year old African-American student who had written and drawn several issues of his series by that point but, in those days before self-publishing 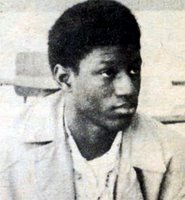 ran rampant, hadn’t done anything with them. To say that the TARANTULA strip was "inspired" by SPIDER-MAN would be too kind. There are swipes galore here, all of which are tiptoed around by Marvel’s John Romita (then THE Spidey artist) in a brief accompanying article when he says, "None of his panels are exactly like ours…He’s created a whole new comic book." According to the article, Elvis’s English teacher was so impressed by the work that he took the comic to Marvel himself. "I don’t really read comic books," said Elvis, "I just look at the pictures." Certainly, based on his sub-literate 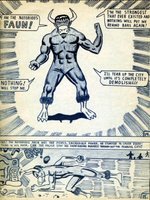 dialogue and character names, writing wasn’t his strong suit. SCOPE says that it took Elvis about a month to finish a 24 page comic book at the rate of approximately one page a night.

His routine was to rule in the panels, do the pencils, add word balloons, make any corrections, trace it with a black magic marker (!!), fill in dialogue and then color the whole thing with colored pencils. Still, while this may not be the traditional method the result seems pretty good when you consider that he was making it up as he went along. All of those late nights tracing Marvel panels must have taken a toll, also. To be fair, many comics artists today started out by copying panels from their favorite artists. Elvis definitely showed some talent. 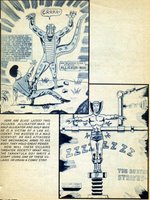 This issue of SCOPE reprinted edited pages of his 24 page ORIGIN OF TARANTULA and even a couple scenes of later villains the Lizard and Doctor Octopus…err…I mean…Alligator Man and the Buster. Even with this unique exposure, though, I don’t think Elvis ever got a shot at the big leagues. Anyone out there know whatever happened to him?
Posted by Booksteve at 9:14 AM