Captain Action and Me 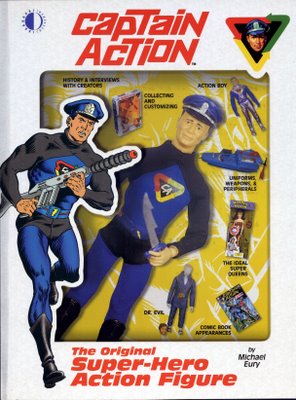 To your left is Michael Eury’s fine book on my all-time favorite toy, CAPTAIN ACTION! It is an in-depth look at the making of, the marketing of and the nostalgia of one of the first great action figures. If you don’t have it, order it today.
While you’re waiting for it, though, zip over to the ever-delightful DIAL B for BLOG which is just finishing up a multi-part piece on CAPTAIN ACTION and his various incarnations.
My friend Terry and I both got CAPTAIN ACTION dolls when they first came out. We, of course, already had at least one GI JOE each and a few assorted other figures (DANIEL BOONE, JOHNNY WEST, etc.). Ultimately, as we became super-hero crazy, we formed them into our Earth Q version of the AVENGERS. CAPTAIN ACTION was the leader. Other members included NOVA, THE LEOPARD, DELTA-MAN, ATOMIC MAN and LIGHTNING! All of these were formed from other action figures using modeling clay, paper towels and other household objects. One of my favorite creations was the Golden Age Hawkman made out of a MIKE HAZZARD figure and using bendable straws and shredded paper towels for the wings. For the mask, I pulled a piece of a yellow balloon over his head and sliced it with a compass. One of the major villains was MERLIN THE VAMPIRE WIZARD, created out of Marx’s SILVER KNIGHT.
I only ever had 3 of Cap’s costumes—BATMAN, AQUAMAN and SPIDER-MAN—but at one time or another these heroes were also members of our AVENGERS. ACTION BOY was not widely distributed around here but Terry got one through a catalog. Later, when I got mine in the second, helmeted costume, 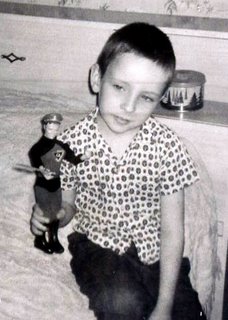 we said that mine was a clone (even though we didn’t know that word) of the original and called him ACTION BULLET!
When DR. EVIL came along later, we each bought a couple so as to say the arch-fiend had duplicated himself! Terry even had Ideal’s SUPERGIRL and BATGIRL figures which later became mine in a trade. Around age 11, I actually attempted to make them anatomically correct using modeling clay. You really don’t want to know how wrong I was!
We hiked the three blocks back and forth between each other’s houses lugging gymbags full of our "Men" long past the age where we should have discovered girls. Our scenarios became ever more complicated and complex and we would spend weeks designing new characters. Even after Terry moved to another county, I would sometimes take a bus to see him and we’d work out AVENGERS stories in our heads but it was just too much trouble to drag the Men around anymore and actually play with them. Eventually, we started going to strip clubs together but it wasn’t the same. We both missed the simpler days of CAPTAIN ACTION and friends and we finally drifted apart after some fifteen years as friends. Sigh.
Years later, after I was married, my wife and I were digging through a box of her old BARBIE dolls and what do we find but KEN…wearing a CAPTAIN ACTION costume!
Posted by Booksteve at 10:11 AM