Famous Comic Book Creators (and Me) 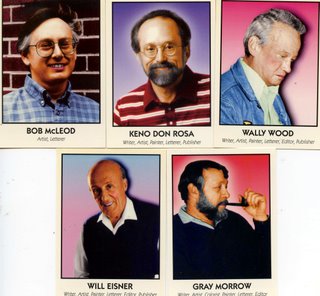 Today I came across my nearly complete set of FAMOUS COMIC BOOK CREATORS trading cards put out by Eclipse in 1992 and was amazed to see how many folks are pictured that we’ve covered here already. In case any of you might wonder what some of these folks look like, I thought I’d share a few.

As you can see, most of these creative people look just like you and I (Actually, Marv Wolfman’s card looks a LOT like me but I couldn’t find it.). We’ve written here about Gray Morrow, Will Eisner, Wally Wood, Gilbert Shelton and Don Rosa, of course but we are especially flattered to have had Bob McLeod, Jim Engel and Mark Evanier actually visit the site (Hi, guys!).
The bottom tier consists of photos of creators of whom we’ve not yet written but who are on the list:
Bill Everett-Creator of the Sub-Mariner, his comics art of the forties and fifties was well-ahead of its time and his seventies run on his creation is one of my favorites!
Howard Cruse-One of the great unsung modern cartoonists, his WENDEL is a humorous but very human gem for open- 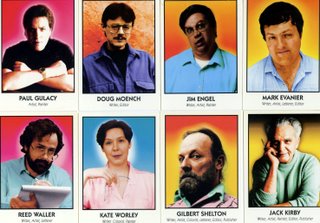 minded adults.
Roy Thomas-There may be better WRITERS in comics but there is no better COMIC BOOK WRITER than Thomas! He knows all the ins and outs of continuity, accessibility, history and on top of that tells exciting stories! His ALTER-EGO is a true classic!
Neil Gaiman-I think I’ve been too intimidated to write about Neil. I’ve loved everything I’ve ever read by him and during my recent financial issues, I simply refused to sell SANDMAN! I saw Neil speak at NKU a couple years back and he was funny, smart and informative, just like his blog!
Gerard Jones-A fine comics scripter in his own right, Jones has become THE comics historian and has redefined the history of comics to those of us who care about such things.
Mike Ploog-Okay, so we DID write a bit about Ploog earlier but not much. I first discovered him with WEREWOLF BY NIGHT and his Eisner-inspired art blew me away. 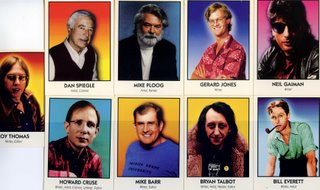 As he developed his own style over the years and moved into film and other fields, he remained a favorite.
Dan Spiegle-There was an interview with him in the first fanzine I ever bought but I still didn’t appreciate him until his long association with Mark E on BLACKHAWK, CROSSFIRE and others convinced me that he was one of the best comics storytellers of them all.
Mike Barr-From BATMAN to THE MAZE AGENCY, his writing has always been smart and classy.
Bryan Talbot-Although he worked on the popular British character NEMESIS THE WARLOCK, Talbot won me over as the creative force behind the graphic novel, THE TALE OF ONE BAD RAT, one of the best of them all in spite of the fact that there are no super-heroes or monsters of aliens in it!

There they are-some, but certainly not all, of my favorites. How do they look? Check out your local comic shop for these and the rest of the FAMOUS COMIC BOOK CREATORS card set.
Posted by Booksteve at 6:01 PM