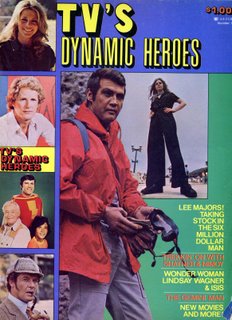 TV'S DYNAMIC HEROES was one of a series of wonderful trivia-oriented magazines edited by controversial uber-fan Ron Haydock in the 1970’s. These publications almost always

employed the talents of pop culture experts such as Don Glut and Jim Harmon (my own editor on IT’S THAT TIME AGAIN 3, still available through BearManor Media) and presented photos and information found nowhere else. Although many of these mags were single subject one-shots, this 1976 one was the first issue of a short regular run.
Highlighting television’s amazingly popular Bionic heroes (THE SIX MILLION DOLLAR MAN and THE BIONIC WOMAN) with no less than four informative articles, you also have the ubiquitous STAR TREK piece as well as SHAZAM, WONDER WOMAN, ISIS, SPACE 1999, Ben Murphy’s GEMINI MAN and even Roger Moore’s then-current TV movie, SHERLOCK HOLMES IN NEW YORK. James Bond, Tarzan and even the original (Spencer, Tracy and Kong) 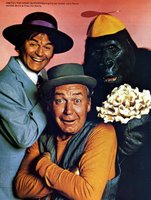 GHOST BUSTERS turn up, too. Somehow or another they even manage to rationalize an uncredited rave review of the book, THE GREAT TELEVISION HEROES which just happens to be written by…Jim Harmon and Don Glut. It really is a great book but doesn’t this just scream "conflict of interest?"
Jim Harmon is a recognized expert on old-time radio in general and TOM MIX and Carlton E. Morse in particular. Don Glut may well be the world’s biggest Frankenstein expert and is known for his works on dinosaurs, also. Ron Haydock—actor, musician, writer, editor—was killed in an accident before the seventies ended. His mags were a ton of fun and covered items that weren’t really being covered elsewhere in those days. We’ll talk about more of them in the future.
Posted by Booksteve at 11:32 AM