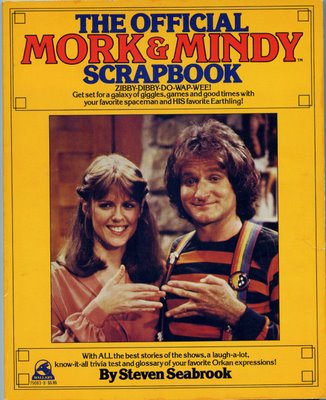 Back in January, during my association with the esteemed Bubblegumfink, I posted this brief ode to Robin Williams on that site. With Robin and his rehab making the news recently, I thought I'd repost it here for those of you who didn't see it there: Lenny Bruce paved the way for Richard Pryor and Pryor paved the way for Robin Williams. It's a good thing, too, because Robin hit the ground running in the late seventies with TV's MORK & MINDY and hasn't really slowed down much since.MORK & MINDY was spun off of a HAPPY DAYS episode in which Richie meets space alien Mork. Robin Williams had thought that his big chance would be on the remake of George Schlatter's sixties favorite, LAUGH-IN but that series stayed pretty much under the radar during its brief run. Luckily, that freed Robin up to be cast as Mork from Ork. It was a silly show by anyone's definition, similar to the latter ALF (and with Robin just about as hairy as ALF!). Pam Dawber was cute but somewhat inconsequential. That said, it quickly became one of the most watched shows on TV 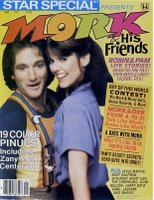 and a national phenomonon. From the beginning, the audience was tuning in to see the rampant lunacy of Williams. How could we ever have imagined then that he was holding back for network TV? Quickly becoming an exploitable favorite, there were magazines and books put out for a quick buck including those seen here. THE MORK & MINDY SCRAPBOOK was just that: light, fluffy stuff about the show with a few good pics but largely filler like vaguely Ork-related games and puzzles.

THE ROBIN WILLIAMS SCRAPBOOK by Mary Ellen Moore is actually a more or less serious biography, looking at his troubled life as well as his career and offering a look (without any real quotes as it was still aimed at a younger market) at the whirlwind of no holds barred comedy that Robin Williams became on stage. The later ROBIN WILLIAMS SCRAPBOOK (What the heck is it with Williams and scrapbooks??) by Stephen Spignesi came out in 1997, long after Robin had left Mork behind and established himself as a serious actor as well as arguably the funniest man alive. Still, in spite of GOOD MORNING, VIETNAM, MRS. DOUBTFIRE and THE BIRDCAGE, much of the early part of the book deals with Mork. Like Farrah, Robin Williams was a seventies icon. Unlike Farrah, he re-created himself over and over and over again without ever losing the underlying wackiness we loved in him when we first met him at Richie Cunningham's house all those years ago.For 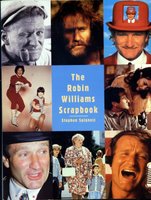 Christmas of 2004, my wife got a Robin Williams Live DVD and she was so excited she insisted on watching it even though our eight year old son was still in the room. Afterward, she turned to him and explained that, "Mr. Williams used some err... inappropriate words in that show." "You mean like 'fuck'?" he asked casually. "Well, uh...yeah. Exactly,." she said. "He sure used 'em a HELL of a lot didn't he?" was my son's reply. I like to think Robin would appreciate that remark.
Posted by Booksteve at 7:25 PM