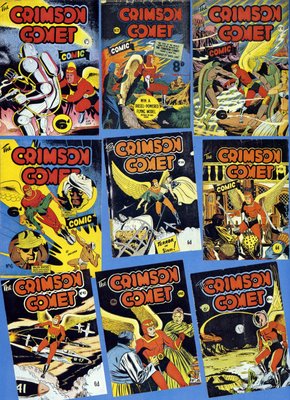 The Crimson Comet is an Australian strip that premiered in 1946 and was created by Comic creator: John Dixon. I became aware of Dixon when THE MENOMONEE FALLS GAZETTE began reprinting his early sixties newspaper strip, AIR HAWK AND THE FLYING DOCTOR in the mid seventies. His art style was similar to that of Jim Holdaway who did MODESTY BLAISE. In the forties, it showed an Alex Raymond influence but also resembled that of the later Charlton artist, Pete Morisi. THE CRIMSON COMET was a RED RAVEN looking character and that's about all I can tell you except for what I learned from the links above. The covers seen here are a page from the British book, NOSTALGIA ABOUT COMICS. Anyone out there familiar with this series?
Posted by Booksteve at 10:36 PM