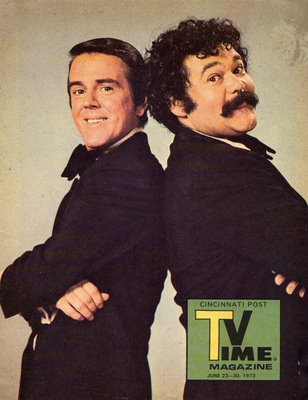 I mentioned Avery Schrieber the other day and it occurred to me that some may not remember him by name. Burns and Schrieber were a favorite comedy team of mine in the sixties and seventies. Their signature routine was one in which tired cabbie Schrieber picks up a talky boor of a fare who goes on and on about nonsense and keeps trying to drag the driver into the conversation. Scores of variations on that theme never failed to make me laugh.
Jack Burns had started out as part of a comedy team with, of all people, George Carlin but an amicable split left Jack at Second City where he eventually met Avery. Jack Paar led them into a long list of TV variety shows that would eventually net them a short lived one of their own in the early seventies.
Along the way, both men continued solo acting careers with the amicable Burns attempting and failing to replace Barney Fife on THE ANDY GRIFFITH SHOW and blustery Schrieber stuck in the historically bad MY MOTHER THE CAR as the villain. After their variety show (from which comes this image) Jack opted to spend more time behind the scenes writing and directing and Avery became arguably more famous than ever in a long-running and popular series of Doritos commercials. He died in 2002 after years of small character parts. Jack Burns’ voice continues to be heard on still-running crash test dummy PSA’s from more than a decade ago and he does still appear on television on rare occasion. With no real reruns or DVD releases of variety shows to speak of (yet) their vast comic output becomes more and more forgotten as time moves on but in their day… "Cab? Caaaab? Caaaaaab?" "Yeah, it’s a taxi cab!!!!" Ya hadda be there.
Posted by Booksteve at 1:57 PM