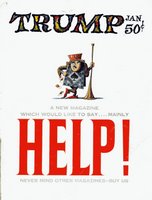 On a recent perusal of the newsstand (once an almost daily ritual, now a rare occurrence) I couldn’t help but notice a magazine called TRUMP, ostensibly put out by "the Donald" receiving major distribution and placement. This was certainly not the case five decades back when another gazillionaire, one Hugh M. Hefner, published two issues of his own TRUMP edited by Harvey Kurtzman. Regular readers know that Harvey is a personal hero of mine. Founder of 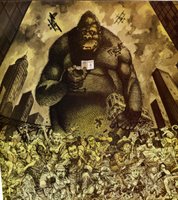 MAD, inspiration to the anti-war movement, grandfather to the Underground comics and the man who gave both Terry Gilliam and Gloria Steinem their starts, the pop culture world of today would no doubt be vastly different had Harvey never existed. In a dispute with Bill Gaines over the newly magazine-sized MAD, Kurtzman jumped ship and took the original "usual 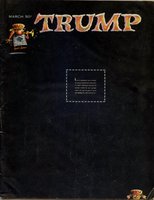 gang of idiots" with him, picking up Arnold Roth and Al Jaffee along the way. Hefner, himself a frustrated cartoonist, funneled early PLAYBOY profits into the creation of TRUMP, an ultra-slick MAD-style magazine of his own, satirically attacking Wall Street, Hollywood, Madison Avenue and all other sacred cows of American culture, popular and otherwise. Kurtzman’s TRUMP was beset by both distribution problems and the fact that Hefner needed to financially divest 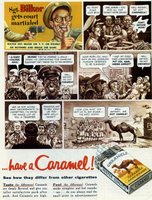 himself of his non-PLAYBOY interests soon after its creation. It ran only two issues. In spite of the problems, it reportedly sold quite well. On slick, glossy paper with lots of interior color, it was certainly the most impressive looking satirical mag of them all (and there were a HELL of a lot of them in the mid-fifties!). Written mostly by Kurtzman, the mostly hilarious features were illustrated with some of the best art ever from the holy triumvirate of Wally Wood (in the first issue only. 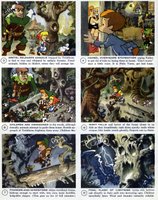 Then he returned to MAD), Jack Davis and longtime collaborator Willie Elder. Kurtzman and Elder would return to PLAYBOY as creators of the long-running LITTLE ANNIE FANNY after a few more failed attempts to rival the monster success of his original creation, MAD. TRUMP faded into history as a pop culture footnote with little of its features being reprinted in any fashion. If you’re a fan of the early MAD, however, you have to get copies of the two 1957 issues of TRUMP. Forgotten as they are, they may just be the pinnacle of Harvey Kurtzman’s influential career.
Posted by Booksteve at 10:24 PM