Ace Hart was a British post-war super hero. He appeared briefly in a post we did here at the Library earlier this year as an example of a character that never appeared in America that I'd like to learn more about. Ace had an absolutely fantastic emblem! Well, yesterday's 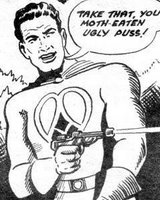 email brought news of a fun new website devoted to good old Ace and, as we're in the middle of a deluge here at the moment, I thought I would direct you all there and then head for higher ground. Enjoy! Ace Hart - early British Super Hero
Posted by Booksteve at 9:25 PM