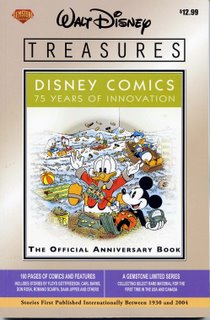 Here' s the recently published Gemstone Official Anniversary Book for DISNEY COMICS -75 YEARS OF INNOVATION. A bargain at any price, this is a well-chosen collection of international Disney stories dating from the 1930's to more-or-less the present. Besides Donald, Mickey and Scrooge, the most obscure characters can be found in these pages. Fethry Duck, a huge hit in the rest of the world for forty years but an also-ran in the US, appears with beautiful animation style art by Al Hubbard from 1964. Bucky Bug, Super Goof, and Arizona Dipp appear, also, in stories originally published in Italy, Sweden, Brazil, the Netherlands and elsewhere. William Van Horn, Dan Jippes, Freddy Milton, Don Rosa, POGO's Walt Kelly and, naturally Carl Barks and Floyd Gottfredson are all represented. If you've never read a Disney comic, this is a good sampler of old and new. If you have, it's a rare treat of a collection! At $12.99 for more than 150 pages of fun and adventure, it doesn't even cost much more than the $6.95 regular price of some of Gemstone's Duck comics! Either way, head to your local comic shop and ask for it today!
Posted by Booksteve at 7:22 PM