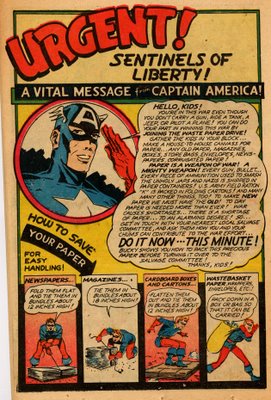 From YOUNG ALLIES, a kid gang book from Timely featuring Bucky, Toro and a particularly unfortunate stereotyped black character called Whitewash, comes this one page recycling propaganda featuring Captain America and Bucky from 1944. Of course, its because of paper drives like these that so many comic books of the period were destroyed driving golden age prices into the mega-thousands that they are today! Oh, well...at least the Allies won the war.Guess there's a bright side to everything.
Posted by Booksteve at 6:40 PM