Harvey Kurtzman and Will Elder spent many years doing LITTLE ANNIE FANNY in PLAYBOY. By all accounts, it was the most expensive comic strip ever produced. Appearing semi-regularly in the magazine for a couple of decades, the fully painted parody became a bit of an institution, thus making it itself ripe for lampooning in the best MAD tradition. As far as I know, though, MAD never touched it (perhaps assuming its young readers wouldn’t be familiar with PLAYBOY). 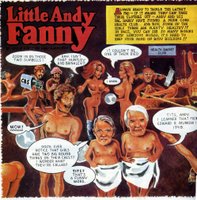 In 1983 and 1984, however, there appeared on the newsstands of America two—count ‘em, TWO—complete magazine parodies of PLAYBOY. One was called PLAYBORE and the other more definitely entitled PLAYBOY—THE PARODY. I may write about them in their entirety at some point but for now, let’s note that these DID actually parody the parody that was LITTLE ANNIE FANNY. PLAYBORE appeared first, offering LITTLE GRANNIE FANNY. With nice art by sometime LEGION OF SUPER-HEROES artist James Sherman, this one is the funnier of the two. PLAYBOY—THE PARODY offers LITTLE ANDY FANNY by one Richard Chenoworth which turns the whole piece into a mildly amusing satire of reporter Andy Rooney from 60 MINUTES. A few years back, Kitchen Sink collected the Kurtzman/Elder originals in two beautiful annotated trade paperbacks. We’ll probably write about them some day also.
Posted by Booksteve at 7:51 PM