Movies That Fell Through the Cracks # 19 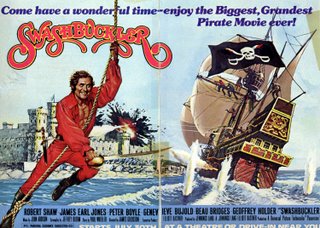 After a series of showy but basically rather stoic performances as villains or surly supporting characters in films such as FROM RUSSIA WITH LOVE, THE STING, THE TAKING OF PELHAM 1 2 3 and JAWS, British actor/playwright Robert Shaw suddenly found himself a leading man in mid-1970’s Hollywood. One of his star vehicles was 1976’s SWASHBUCKLER, a good old-fashioned romp of a pirate film in the Errol Flynn tradition. Met with mixed reviews on its initial release (and still in the various video review annuals) and looking more than a little kitschy from this contemporary TV GUIDE ad, it really was a lot of fun with Shaw winking at the audience the whole time in perhaps the most energetic performance of his career. I recall having a hard time reconciling Irish gangster Doyle Lonegan with Red Ned Lynch.
James Earl Jones, Geoffrey Holder and Avery Schrieber stole the show as supporting pirates with Peter Boyle as the slimy villain and Genevieve Bujold (almost VOYAGER’s Captain Janeway) as the less than distressed damsel. Beau Bridges was even along for the ride.
Despite several other star turns, Shaw would die just two years later and be remembered mostly for his supporting roles and his plays. The pirate film made several other attempts at a comeback (including two musical versions!) before Captain Jack Sparrow finally struck treasure on the silver screen as a much more traditional pirate anti-hero in Disney’s PIRATES OF THE CARIBBEAN nearly thirty years later.
Posted by Booksteve at 8:44 PM