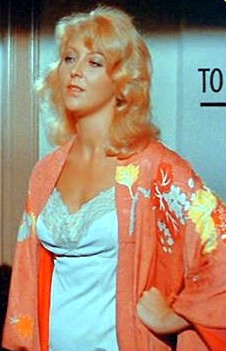 Just an update to let you know that work continues with John O'Dowd (see John O'Dowd Presents: Hollywood Starlet - Barbara Payton) on what promises to be the definitive look at Christa Helm, the lost seventies starlet who was murdered with her only starring role left unreleased. Both John and I are following up on leads regarding both Christa and the film, LET'S GO FOR BROKE so there will probably be little info released here for awhile. In the meantime, here are a couple more screen captures found on the Net showing Christa in her memorable WONDER WOMAN guest shot.
Posted by Booksteve at 7:33 PM