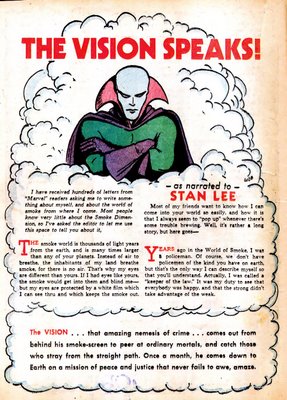 Here's an early credited text piece by Stan the Man (from the September 1941 issue of MARVEL MYSTERY COMICS)and featuring the Vision, an obscure character who probably would have remained that way if Roy Thomas hadn't dusted him off and updated an android variation on him for THE AVENGERS in the late sixties. Sixty-five years years later, of course, Stan has been asking the musical question, "

WHO WANTS TO BE A SUPER-HERO?"
Posted by Booksteve at 7:19 AM