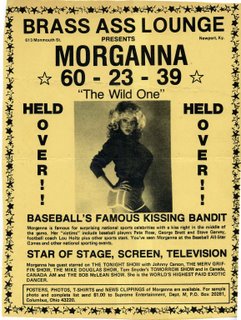 I am not a breast man. Never cared for Russ Meyer films, never found Rusty Warren records amusing, not a big fan of Victoria’s Secret catalogs. After some consideration, I do believe that this has something to do with the fact that the very first woman I ever saw topless in real life was Morganna, Baseball’s famous "kissing bandit." No one else could possibly live up to that first viewing. At 60 inches in early 1981 when I saw her (twice), Morganna’s bosom was large enough to be stunningly impressive to my 22 year old mind and yet not freakishly large like that of some other exotic dancers.
Morganna Cottrell earned her footnote place in American sports by running out on the playing fields and kissing famous players that she liked, partially for the publicity but mostly because she loved sports, particularly baseball! She began her on the field shenanigans in 1970, much to the chagrin of the powers that be. That year she kissed several players including Cincinnati’s Pete Rose before being arrested for the first time at the All-Star game. The novelty gone, she retired from the kissing game for a few years only to return with a vengeance in the late seventies. Her antics outraged some, delighted others and earned her a place in the official Baseball Hall of Fame.
Having heard about her since I was twelve, I decided to go see her act 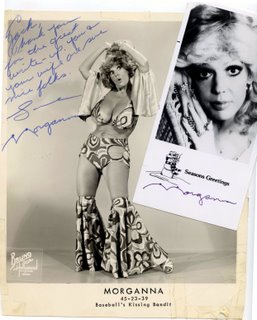 with my friend Terry a decade later when she came back to the area. I’ll be honest, as a comic book geek and nerd in good standing, I just wanted to see a naked lady and this was my way of rationalizing it. I was surprised, though. Not just a stripper, she was also a comedian and a storyteller, regaling the

audience at the smoky Kentucky bar with her Southern-accented baseball anecdotes as well as producing a baseball player hand puppet for an amusing visual gag. She then proved that she could bump and grind in the great tradition, swirling and twirling in a sheer cape to pounding disco music. At the end of her act, she said she’d be out front in a few minutes if anyone wanted to meet and talk and get her autograph. My friend and I went. We were the only ones who did. It was sad that this woman who had just given literally her all to entertain a mostly drunken group of guys could not get them to even speak to her when she had her clothes on. I think it was at that moment that I began to realize that all women are naked under their clothes and that all women you see naked under any circumstances have brains, hearts and feelings. It kind of took the fun out of strip clubs. We stood out there in the lobby talking with Morganna for about fifteen minutes. She was courteous, friendly and asked about us as much as we asked about her. We each bought one of her Farrah-like posters and had her sign them, noting the conceit that she dots her "M"s appropriately in her signature. Soon afterwards, I even picked up more autographed pics, clippings and an official press release from a columnist at the newspaper where I cleaned up after hours. Morganna continued her career as well as her baseball hobby, appearing in a lovely soft focus photofeature in PLAYBOY a few years later. Eventually, she retired to her home in Columbus, Ohio where, last I heard, she had become a bit of a recluse. I hope she’s happy, though. She was a nice woman and I remember being impressed by more than just her measurements. In fact, after Morganna, measurements never really impressed me at all.
Posted by Booksteve at 7:59 PM