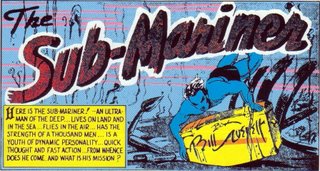 Bill Everett was a comic book artist who was ahead of his time. Looking now at his early SUB-MARINER stories from MARVEL MYSTERY COMICS is nothing less than a 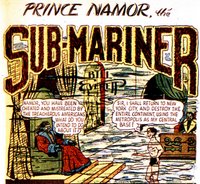 revelation. Whereas most of the artwork in early Marvels (and DCs for that matter) is decidedly crude by modern standards, Everett’s is polished and inventive. He seems to be inspired by book illustration rather than by other comics artists and his work has a unique and far superior feel right from the beginning. Moody and yet cartooney, his storytelling is enhanced by his own lettering, often appearing in boxless narration rather

than in word balloons. Adding to the overall appeal are the opening panels and logos of each strip, foreshadowing Will Eisner’s classic SPIRIT splash variations.
With the haphazard reprints of this work over a forty year period, it isn’t easy to realize that SUB-MARINER was far from just another super-hero. For one thing, Everett does the strip as a serial, perhaps because of its original intended audience in the aborted MOTION PICTURE FUNNIES WEEKLY. Namor is a young Prince of mixed parentage whose first contact 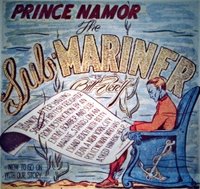 with surface people ends in the deaths of several of them. Having been told all his life how the "white man" has harmed his own race, he vows vengeance on them. A female police officer gets him to question the wisdom of his campaign and convinces him to help in the war effort. Namor actually dresses like a super-hero for awhile in New York City but is told that he still has to face trial for the murders he

committed before he knew better. He humors them and allows himself to be brought to trial where he is unexpectedly convicted and sentenced to death. Attempting to escape, he realizes that he has been being consistently drugged by his captors and is too weak to do so. Only the power of the electric chair reinvigorates him and he once again vows a reign of terror on the white man, taking up residence in the Statue of Liberty for attacks on Manhattan which eventually bring him to the attention of the Human Torch. This leads to the various legendary "fire vs. water" battles after which Subby’s strip finally begins to settle into a blandness that will follow it throughout the forties. 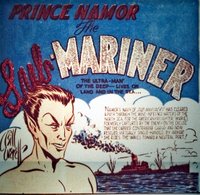 Never straying far from the comics field, creator Everett returned to the strip with an even smoother style in the fifties and would enjoy another brief run with his waterlogged baby in the sixties. In the early 1970’s, beginning with SUB-MARINER number 50, he would return one final time just before his death for a handful of some of the very best comics of their day. 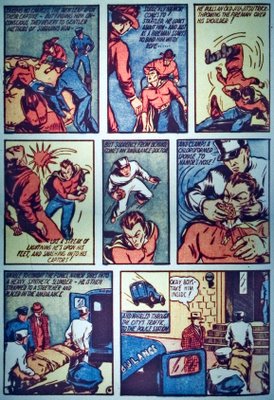 Posted by Booksteve at 7:29 PM