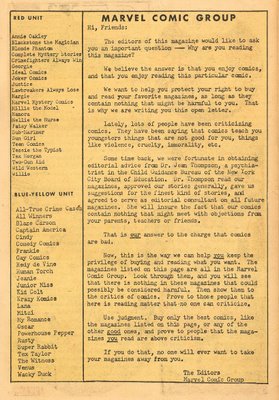 Here's a cool find. This full page open letter appeared in 1948 Marvel (Hmmm...Shouldn't that be "Timely?" It says Marvel, though.) comics and addressed the early phases of the growing anti-comics sentiment. "The Editors" (Stan Lee?) tried to distance themselves from the negative press that was beginning to appear by enlisting the aid of a child psychiatrist named Jean Thompson (no relation but coincidentally my wife's real name!) to, in theory, ensure that their books were clean and wholesome. As far as the titles, note that they are all over the board with the few super-heroes remaining being Cap, Subby, the Torch, Venus, Blonde Phantom and Sun Girl. Future super-hero Patsy Walker was already around as were Kid Colt and The Two-Gun Kid, just beginning long runs that would last into the early seventies for each of them. Interesting, too, to note on the left that Marvel was at the time divided into a "red unit" and a "blue-yellow unit." Anyone know what THAT was all about?
Posted by Booksteve at 12:02 AM