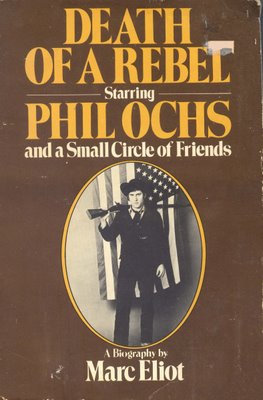 Today I noticed a facsimile edition of Abbie Hoffman’s STEAL THIS BOOK on the shelves in a bookstore and it reminded me of Abbie’s Yippie friend, singer Phil Ochs. Phil Ochs was a protest singer and a folk singer who, according to some, was on a par with Bob Dylan in the sixties and early seventies. Due to their status in the folk music field the two became uneasy friends and fellow travelers. Ochs, however, remained a footnote in the Dylan story while Dylan loomed large in the tragedy that was Phil’s life.
The two men rose to prominence around the same time but the difference is that both Phil’s songs and his voice were much more melodic than Bob’s. For some reason, though, the public latched onto the atonal troubadour with the straining voice while Ochs ran alongside just trying to keep up. The closest thing he had to a well-known song would have to be "I Ain’t Marching Anymore," a simple and wonderful song about the futility of war.
In his personal life, Phil Ochs’ lack of major success clashed with his mental and emotional issues, leading him down the sadly traditional pop star path of drugs and alcohol. In the seventies, he actually chose to become someone else, creating a surly alternate personality he called John Butler Train. Train denied being Ochs and for a time no one was certain if it was some type of anarchist put-on or if the singer’s bipolar issues had manifested themselves in multiple personalities. Train even claimed to have murdered Phil Ochs. Phil eventually became Phil again, though, but while recovering at his sister’s home from a recent accident in 1976, he chose to hang himself.
According to Marc Eliot’s book, DEATH OF A REBEL, one of several 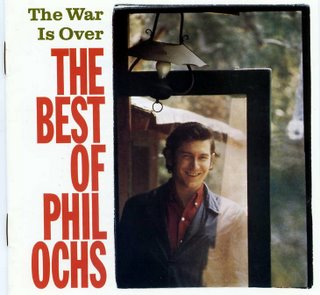 booklength bios, Phil Ochs was passionate about life and what he saw as the evil caused by war and man’s inhumanity to man. He had issues, as do we all, and his dreams never really came true. He left behind some marvelous music however, from his early protest songs to his later attempts at mainstream pop, his resonant voice shines through. There are many compilations including a definitive box set I could never afford but the CD seen here is a nice representative selection of some of his middle period music with a live version of "I Ain’t Marching Anymore."
Phil’s brother Michael collected music-related photos and eventually established the Michael Ochs Archives, the definitive collection of pop culture pictures which is probably credited in every single rock music book you have ever read. As time has gone on, Phil’s image as a cult figure has grown even as the general public’s awareness of him has dimmed. Music For Your Eyes: Phil Ochs recently ran a couple of clips of the handsome singer at his peak from Swedish television (he may not have been officially banned from US TV but his appearances were few and far between). Also, here’s a link to Phil Ochs - Wikipedia, the free encyclopedia and a site with lots more Phil Ochs links. As you might suspect, the Michael Ochs Archives is also represented on-line at Welcome to the Michael Ochs Archives archive.
Posted by Booksteve at 5:26 PM