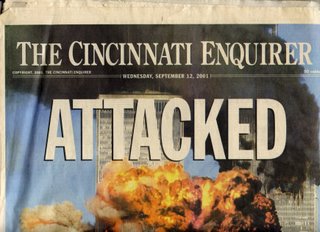 In July of 2001, my wife had the privilege (due to her involvement with the Million Mom March of 2000) to be invited for a week as a sort of civilian ambassador to a special United Nations conference on gun control issues. Just a year after having had her back seriously injured when thrown from a horse, she was uncertain as to whether she could or should go. I urged her to take the opportunity as it was unlikely ever to be offered again. She went. She spent five marvelous days in New York City getting lost in the UN Building, attending meetings, hanging with celebrities such as Judy Collins, appearing briefly on GOOD MORNING AMERICA and making friends with a longtime hot dog vendor who was retiring at the end of the week. When she flew out to come back home, the plane circled Manhattan and she saw for the first and only time the majestic twin towers of the World Trade Center. A month and a half later, a couple other planes saw that view one last time. 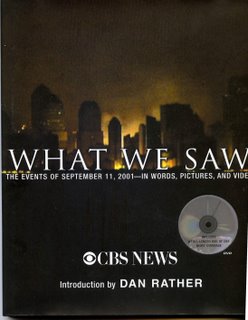 I was off work that morning and our son, then aged five, was in Preschool until noon. My wife and I were flipping the channels on the TV when, just before 9 AM, Bryant Gumbel on CBS noted that their cameras had detected a fire at one of the twin towers and that the show, which normally left the air at 9, would stay with it live. As we watched, they began to receive reports that a small plane may have accidentally crashed into the upper floors. Then, in one of the most shocking moments in television history, a second plane exploded into the picture and we all immediately knew what was happening.
At my son’s preschool, they chose not to tell the teachers what was going on so as not to panic the children. Blissfully ignorant, they worked with the kids on cutting, pasting and stapling crafts that day. Seen here, the project my son did that day featured

a somewhat plane-shaped "X" seemingly impacting against a tower-shaped rectangle. It’s also been described as looking like an explosion from the middle of the rectangle. The teacher wrote his name and the date on it and it’s been on our refrigerator ever since.
Whether or not we knew anyone who died that day, all Americans lost so much. Probably more than we even suspect as yet. My new job is at an Airport and every day that I go in reminds me of how my world has changed since those few terrible hours that day. All I can do is sigh. On the evening of September 10, 2001, my son and I stood in our back yard and watched a plane as it flew across the night sky. We wondered where it was going, who was in it and wished it a safe journey. That innocence was stolen from us all the next morning.
Posted by Booksteve at 12:25 AM