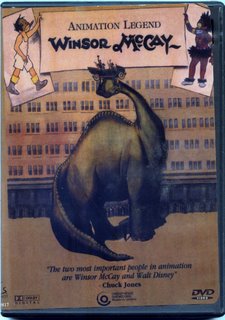 My son, now 9 and soon to be 10, has recieved, as you might expect, a classical education. Early on, he would tell people that his favorite singer was Chuck Berry. In school now, if someone asks "What's the answer?" he shouts out "42." The password is, of course, "swordfish" and he DOES know whether the chalice from the palace has the pellet with the poison or the brew that is true. Thus, it shouldn't surprise anyone that, when we ventured to purchase our very first DVD player when he was about two or three years old, the very first thing he wanted to get was Winsor McCay's GERTIE THE DINOSAUR. Widely considered as the first actual cartoon character, McCay did thousands of simple drawings to animate the benign brontosaurus for her 1914 debut. Originally considered as a novelty, he took the act on the road in vaudeville and later filmed silent inserts of his stage setups for the film itself. As the creator of the classic, visually and architecturally amazing LITTLE NEMO IN SLUMBERLAND (whose animated debut is also featured on this DVD), McCay's legacy as a newspaper cartoonist is secure. As the creator of Gertie, his place as a pioneer animator is equally important. Oh wait a minute! I just remembered! We had to ORDER this one in! So we'd have something to watch in the meantime, we bought the Ralph Fiennes/Uma Thurman AVENGERS movie! Errr...so much for taste?? Here's a link to a nice Winsor McCay Biography with illustrations. His cartoons, all of the surviving ones of which are collected on this disk with a number of extras, have been recently repackaged in what is undoubtedly an upgrade but this one will always be special to my son and me.
Posted by Booksteve at 7:04 PM