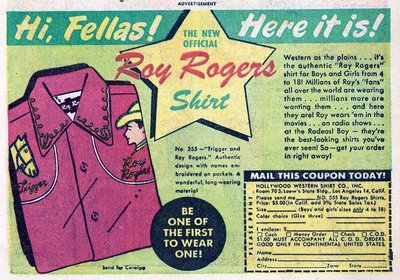 Even when I was a kid in the early sixties, Roy Rogers was one of my heroes as his fifties TV series remained in syndication for years and he and Trigger always seemed to be on the covers of the writing pads I'd get.. Here's a vintage ad (late forties) for an "Official" Roy Rogers shirt. Although actually a bit conservative by the King of the Cowboys' later wear,note that Roy and his horse appear on the shirt itself! None of Roy's
trademark fringe, though, just the little lasso-lookin' curlicues. Like the ad says, "millions of Roy's 'fans' all over the world are wearing them." Not sure why "fans" is in quotes, though. Note also that Roy himself apparantly wears this type of shirt in his movies, rodeos and...on the radio??? He wears shirts with his own picture on them?? Why that egotistical...! Finally, if as the ad says it's for boys AND girls, why does it say "HEY FELLAS!" in big print right up there at the top. Hmmmm....?? OH! One more thing! It also says "Be one of the first to wear one" in the circle at the bottom and yet as we've already established, "millions of Roy's 'fans' all over the world are wearing them." The Hollywood Western Shirt Company offered these. With a name like that, you wonder if they also had a shirt for Gene, Hoppy and my personal latter-day B-western fave, Tim Holt!
Posted by Booksteve at 10:23 PM