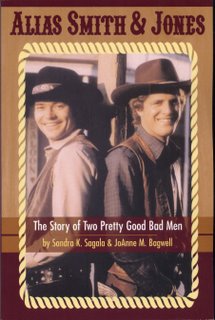 Aged twelve, I was playing at my friend Terry’s house on New Year’s Day, 1972. It was late afternoon and we had the radio on when a report of actor Pete Duel’s suicide came on the news. Duel had been starring in ALIAS SMITH AND JONES, one of my then-favorite TV series. I had enjoyed seeing him on anything since I had first noticed him in an obscure sitcom entitled LOVE ON A ROOFTOP. He was handsome and brooding but had a deft delivery with a funny line and his characters always seemed smarter than anyone else on the show. For the next couple days, I was obsessed with trying to make some sense of this senseless act. Then, in those pre-Internet days, the news reports faded. The show itself continued without even acknowledging the death, simply inserting another handsome charmer into Duel’s role.

"Inspired" by the success of 1969’s BUTCH CASSIDY AND THE SUNDANCE KID, the TV series presents the adventures of two personable young outlaws trying their best to go straight and get a pardon from the Governor. Duel’s Hannibal Hayes was the smart, wisecracking con man while Ben Murphy’s Kid Curry was the fastest gun alive. With a wealth of great guest stars (Sally Field, Walter Brennan, Jack Elam and even Dick Cavett and Dave Garroway!), generally lighthearted scripts and a great chemistry between the two leads, the series quickly built a fan base in spite of the ratings competition from THE FLIP WILSON SHOW.
Coming toward the end of the second season, the chronically depressed Duel’s choice of suicide would seem to have dealt a death blow to the series as well but actor Roger Davis, late of DARK SHADOWS and formerly the show’s announcer, pulled a "Darren" by stepping into the Hannibal Heyes role without any sort of explanation. Having previously appeared in an earlier episode as a charming villain, it was interesting to note there the differences with Duel. That said, little or none of the on-set animosity between Davis and Murphy (fueled by lack of grieving time) is detectable in the episodes that played out the second season. In fact, their chemistry was good enough for an entire third season to be made with a slightly different style but no loss of quality scripts.
With the passing of years, the fact that the show did NOT acknowledge its star’s suicide means that new generations can judge the series without the stigma with which that tragedy marked it at the time. Recent cable reruns reveal ALIAS SMITH AND JONES as a true gem of a show every step of the way. The 2005 book above (available from BearManor Media) is a fitting tribute that not only serves to pay tribute to Pete Duel and all involved but also, for the first times in decades, reunited Roger Davis and Ben Murphy. ALIAS SMITH AND JONES is soaring to a new popularity on cable. This is finally what Pete Duel is being remembered for, not his sad end. If you haven’t seen ALIAS SMITH AND JONES, I highly recommend it. The book, too!
Posted by Booksteve at 12:16 PM