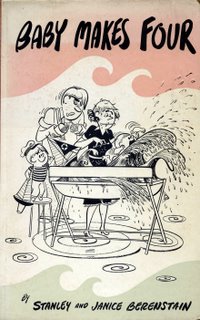 When I was growing up, I really wanted to be a magazine cartoonist. I studied the humor and the art styles of the cartoons in the magazines my mother would read. This being the early sixties, though, I had already missed the solid cartooning of Stan and Jan Berenstain. After creating the now classic BERENSTAIN BEARS in 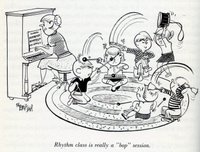 1962, they never looked back at their magazine cartooning career. Thus it was only after I grew up that I discovered their books for adults done in the 1950's. Offering lighthearted--if ocassionally rather conservative--advice, 1956's BABY MAKES FOUR is a good example of the child-rearing books the talented couple wrote and illustrated. It's designed primarily as a humorous look at a new baby in the house and yet a number of chapters offer specific advice on acceptable TV shows, toys, etc. Their thick-lined drawing style was clean and very smooth even then and although it later developed into the familiar ultra-slick "bear" style, their humans were just as funny and reminiscent of DENNIS THE MENACE. Here are just a couple of the

many examples from the book. Although their greatest success would come in children's books, the fact that they started out as cartoonists may qualify them as the most successful cartoonists of all time. Stan Berenstain died in 2005.
Posted by Booksteve at 8:15 PM