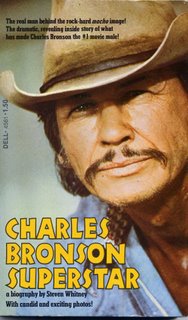 In the seventies, after more than two decades as a successful character actor, Charles Bronson followed in the path of Lee Van Cleef by becoming one of the most popular actors in the world...everywhere except here in America. A series of popular Italian westerns and gangster movies made Bronson and wife Jill Ireland an unlikelypair of international jet setters. Finally, in 1974, the movie DEATH WISH made him a superstar in America, too. This book, CHARLES BRONSON, SUPERSTAR was one result. Now a major player in the Hollywood system, the ultra-macho actor gave standout performances in films such as HARD TIMES and BREAKHEART PASS (one of my personal favorite westerns of all times) making him an actor to reckon with and not just a "movie star." Whether it was bad advice, bad contracts or just plain bad karma, Charles Bronson never plateaued like Clint Eastwood. A series of throwaway vehicles (like KINJITE: FORBIDDEN SUBJECTS)derailed his career and the sad and very public passing of his wife from cancer clearly aged the man. Exploitation films such as the umpteenth unneeded low-budget DEATH WISH sequel became the norm and no real acting was required. Oddly enough, it was television, where Bronson had started out long ago, that came to his rescue at the end of the day. In his final years, he was able to show his acting skills again in a series of TV movies tailored for him. Starting with YES, VIRGINIA THERE IS A SANTA CLAUS and ending with several well-done FAMILY OF COPS films, Charles Bronson was able to remind us all a few more times that he was a better actor than he was often given credit for. That's a better legacy than being a superstar.
Posted by Booksteve at 6:53 PM