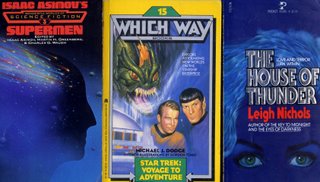 Stopped by Phil's Music, Books and More while I was out catching up on some bills today. Phil’s is kind of an institution in the Cincinnati areaand they’re getting ready to move to a better location next month. Phil and his crew know more about music than most so-called experts but the books part didn't go too well so they're selling off product at amazing deals. I picked up a box full of books from Phil for almost quite literally a song! Along with Raymond Chandler, Jules Feiffer, Dave Barry, S. J. Perelman, Fred Saberhagen and more I got the three cool items seen here:
THE HOUSE OF THUNDER is actually by Dean Koontz writing under what must have been his favorite of many pseudonyms. Little by little, Koontz has been reissuing (and in some cases re-writing) the Nichols books under his own name but this one is a 1982 first printing original.
STAR TREK: VOYAGE TO ADVENTURE is a "Choose Your Own Adventure" kind of book featuring the classic STAR TREK crew from 1984, a point where they were still the ONLY STAR TREK crew!
Isaac Asimov presents the 1984 SUPERMEN collection featuring stories by Koontz again, Roger Zelazny, Robert Silverberg, Poul Anderson, Larry Niven and, among other equally bright sci-fi lights, Harlan Ellison!
Lots of mysteries, sci-fi and romance paperbacks left, mostly from the late seventies through the early nineties. If you’re in the Greater Cincinnati Area, get yourself to Phil's Music, Books and More. Tell 'em Booksteve sent ya (I always wanted to say that!).
Posted by Booksteve at 5:14 PM