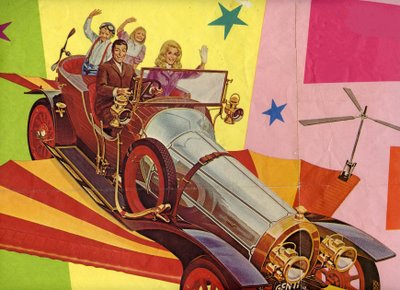 Although a footnote to the fact that he created James Bond, Ian Fleming’s CHITTY CHITTY BANG BANG has had rather a successful life as a children’s book, a movie and a stage play. The film adaptation holds rather a special place for me as it was also my first date, aged 9.
I met my fourth grade girlfriend Debbie at the Liberty Theater in Covington, Kentucky on a Saturday afternoon in 1968. This was one of those old fashioned ornate movie palaces (albeit on a rather small scale) with statues and fancy carpets and, being kids we ran around it as much as we watched the movie. In fact we had to in order to avoid the kid who lived across the street from Debbie who had spotted us and kept bothering us as I tried to watch the movie with my arm around her!
Eventually, we sat through it twice that day (and walked home with the other kid) and I’ve enjoyed it a number of times since. As I’ve grown older, the biggest revelation to me is that CHITTY CHITTY BANG BANG is actually a musical Bond movie for kids! I mean, seriously, look at it: book by Ian Fleming, script by Roald Dahl (who had just scripted YOU ONLY LIVE TWICE), produced by Cubby Broccoli, a cool theme song, Gert (GOLDFINGER) Frobe as the larger than life villain, a beautiful but improbably named leading lady (in this case "Truly Scrumptious"), and, of course, the amazing car with all the gadgets! Surprisingly this means that Dick Van Dyke was playing the 007 role. Van Dyke. DICK Van Dyke. Hey, it works for me but then I liked ROBIN CRUSOE, USN and NEVER A DULL MOMENT, too!
Posted by Booksteve at 8:04 PM