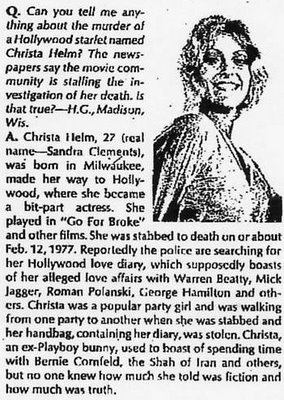 I’m pleased to announce that I have been asked by author John O’Dowd, currently completing a biography of starlet Barbara Payton for BearManor Media (publishers of IT’S THAT TIME AGAIN 3 in case you’ve forgotten!) to collaborate with him on a magazine article about Christa Helm and LET’S GO FOR BROKE. He has already amassed quite a bit of information and I’m working on a few leads myself. I’ll keep you informed.

In the meantime, just a few tidbits I’ve recently come across regarding the ill-fated Ms. Helm:


In a January, 1974 newspaper piece, Broadway columnist Leonard Lyons noted that "Christa Helm, Frank Raiter and Chitra, the three stars of the new movie, GOING FOR BROKE (sic and perhaps the film’s working title) were discussing a voodoo sequence in the story in a Miami restaurant near the location. A patron overheard the descriptions of the strange, secret rites and called the police. The next day the set was visited by police officials who briefly watched the scene being filmed. They laughed—and left."


Further back, a September ’73 wire service filler paragraph proclaimed that "GO FOR BROKE will introduce Christa Helm in the title role as a New York television reporter who uses James Bond tactics to uncover an international kidnapping ring."


A 1975 piece by Earl Wilson has Christa herself describing yet another film with which she was associated! According to her she and film producer "Joseph Middleton" wrote and produced the movie, ILLUSIONS OF A LADY together. They were a couple at the time and broke up, said Christa, over his insistence on shooting hardcore scenes for the picture. "He said ‘I’m shooting it hard’ so I got in my car in my bikini and drove home," Christa said. "He sat there and let me carry out my own bags. I was livid." ILLUSIONS OF A LADY was actually written, produced and directed by one "Jonas" Middleton and starred future disco superstar Andrea True and porn legend Jamie Gillis.
Posted by Booksteve at 12:03 AM