Movies That Fell Through the Cracks #18 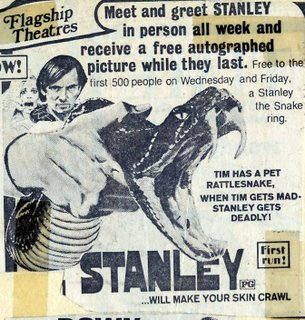 The movie WILLARD starring Bruce Davison as a man who used rats to attack his enemies was a surprise hit in 1971, inspiring a horde of similar films with other animals. STANLEY, 1972, was an early and obvious "homage" using snakes.
Chris Robinson, who had a steady under the radar career both before and after this rare starring vehicle plays the Florida swamp man who uses his friendship with snakes-particularly the title snake-to get them to attack folks who want to make them into belts! The great character actor Alex Rocco, just starting to move into A list films co-stars as the bad guy.
What gets me now though is the ad. Not only do the first 500 people get a snake ring and "autographed" pictures of the title snake but he was actually APPEARING in person! Okay, assuming he appeared at various theaters around the country and not just this one, how do you think he got there? Did he just slither along, eassssin’ on down the road OR…did he fly like any other film star? If so, wouldn’t that have made Stanley the original Snake on a Plane???
Posted by Booksteve at 6:56 AM