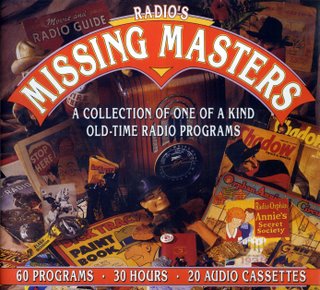 Here at the Library, we have over 1000 tapes and CDs of old-time radio episodes, many of which were rediscovered and re-mastered through the courtesy of a company called Radio Spirits.
Radio Spirits was the brainchild of a surprisingly young man named Carl Amari. He would take it to amazing heights before becoming perhaps the most controversial figure in the old time radio hobby (and that’s definitely another story!) and then selling the company. At its peak in 1993, however, Radio Spirits came out with the absolute treasure trove of OTR programs seen here, RADIO’S MISSING MASTERS.
This incredible set probably meant nothing to the general public but to the OTR buffs, it was a real treat. The box set offers 60 one of a kind rarities, some of which had never before been heard by the public. Audition programs, specials and first appearances abound! Not all of the shows here are good by any means but all are historically interesting for one aspect or another.
Among the gems found in RADIO’S MISSING MASTERS are the following audition (radio’s term for pilots) shows:

YOURS TRULY, JOHNNY DOLLAR-starring Dick Powell who handed the role off to others when it went to series.

Also featured are the very first episodes of many series both popular and rare as well as a few rehearsals and a number of one-off episodes such as Jackie Gleason replacing an ailing William Bendix in THE LIFE OF RILEY (Gleason was starring in the TV version of the series at the time) and a BABY SNOOKS AND DADDY without Baby Snooks!
The set is rounded out with a selection of the ONLY surviving episodes of a number of series including Glenn Ford in CHRISTOPHER LONDON, a mystery created exclusively for radio by PERRY MASON’s Erle Stanley Gardner.
RADIO SPIRITS put out an impressive line of box sets and mega-box sets for both the serious OTR collector and the casual fan but this kind of stuff, to the true connoisseur, is gold! RADIO’S MISSING MASTERS-FOUND!
Posted by Booksteve at 11:11 AM