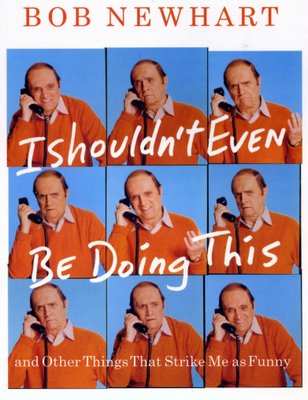 I get most of my comic timing from Bob Newhart. Filled to the brim with perfect pauses and natural stammering, Bob’s "button down mind" and deadpan delivery rarely fail to convulse me with laughter. His first book, I SHOULDN’T EVEN BE DOING THIS, is due to hit the stores any day now and it’s a great read. Part memoir, part career recap and part anecdotal musings, it offers a glimpse at some of his most successful moments and then a walk behind the curtains of those times. All the usual suspects associated with Newhart make appearances in his memories-Dick Martin, Suzanne Pleshette, Don Rickles, etc. From his success with his early sixties albums to his various attempts at a film career and his umpteenth TV series, reading the book is like spending a few hours with a very funny old friend. In fact, that’s exactly what it is! Much of the book is written in a typical conversational style and so it works best to read it with Bob’s voice in your head. You even get a few classic routines in their entirety including Abe Lincoln and Grace L. Ferguson. (I actually prefer the Sir Walter Raleigh sketch, myself). Seeing them on paper you come to realize that delivery really IS everything. Without Bob’s voice they just aren’t THAT funny!
I saw Bob Newhart onstage in Cincinnati in the late seventies and was surprised to find him doing a lot of blue material in his act. It wasn’t that it wasn’t amusing. It was just that one didn’t expect it from Bob. In fact even the title of this book comes from the punchline of an old dirty joke. Taken literally, though, I think it’s safe to say that yes, Bob, you SHOULD be doing this and we thank you for it! A very entertaining book! Perhaps you should do it again even!
Posted by Booksteve at 8:35 AM