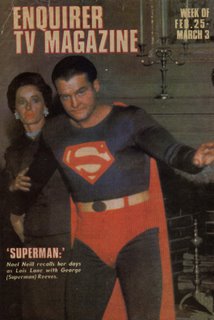 George Reeves died under controversial circumstances in 1959--the year I was born. Through the magic of reruns, that didn’t stop THE ADVENTURES OF SUPERMAN from being a favorite of mine throughout my entire life. At age 4, when my tricycle was stolen from the alley behind our apartment house, I took solace in my favorite TV superhero and I knew that if he were there, he’d bring the undoubtedly vicious culprits to justice!
Reeves’ Clark Kent was, to me, the real star of the series. By no means "meek" or "mild-mannered," his Kent was a tough reporter who probably could have taken down mobsters as well as his more colorful alter ego! He also looked more natural in glasses than either Kirk Alyn before him or any of the actors who’ve followed in his big red boots. His Superman, on the other hand, often spoke gently and with a knowing smile.
Such a contradiction in terms was, by all accounts, George Reeves, himself. 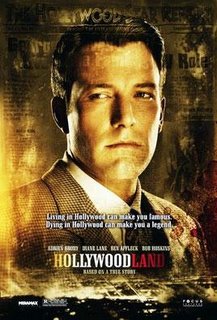 The subject of much rumor and speculation for nearly fifty years now, a new movie opening next month will attempt to bring his mysterious death to light for the moviegoing masses. HOLLYWOODLAND casts Ben Affleck as Reeves in what may be inspired casting. The resemblance is impressive and early reports indicate a serious, perhaps award-worthy performance from the former DAREDEVIL star.
The gist of the story deals with Adrien Brody as a (fictional) character trying to sort out the various factors in Reeves’ death that seem to put the lie to the official verdict of suicide. Bob Hoskins and long-time favorite Diane Lane co-star. The film is set to open on September 8th. Here’s a link to the HOLLYWOODLAND official movie Web site where you can check out the trailer. In spite of the nondescript title and the somewhat heavy-handed way the filmmakers are downplaying (at the risk of ticking off various corporate attorneys no doubt) the Reeves/Superman connection, it looks like Brandon Routh may not be this year’s only big-screen Man of Steel!
Posted by Booksteve at 11:25 AM