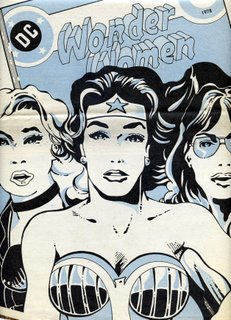 Here’s one of those wire service reports where the writer seems not to have looked at a comic book before in his life until writing this article. Clicking on the sections should make them readable.This one is from 1978 and is on women’s liberation in then current comics. It’s not as fun to pick apart as most of its kind but it has its moments such as when he refers to "Katar the Hawkman." I 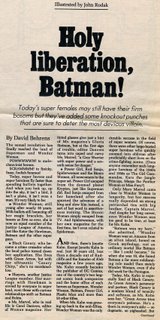 particularly like the condescending reference in his statement that the Hawks’ marriage "is envied by everyone in super land, even those with curious relationships such as Batman and Robin."
There are some nice quotes from Jenette Kahn, at just 30 years old then still a young woman herself but running DC rather well I thought. The gist of the article is that more and more positive female role models were appearing in comics. Unfortunately, one of the prime examples given is Ms. Marvel who would become a rape victim in a future issue of AVENGERS. The NOW representative seems surprised that little girls actually look up to Wonder Woman (then big on TV which probably accounted for that) but Ms. Kahn herself admits to always relating more to Batman. TV’s BIONIC WOMAN is tossed into the discussion of comic book heroes for no apparent reason.
I don’t know. The comments from the Comics Code’s Leonard Darvin seem a tad sexist to me as he goes on about heroines with large busts and adds that "…Wonder Woman isn’t so bad either." He also seems a little too excited when he adds that as long as their nipples, pubic areas and buttocks are covered, women in comics "…can be as nude as the day they were born." 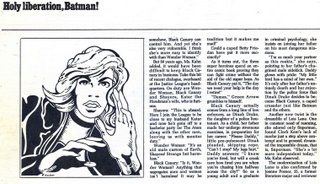 Even the main accompanying illustration, rather than come from the comics themselves, is drawn by one John Rodak. You see three women. The one on the left is most likely supposed to be Black Canary, the one on the right might be womens liberation poster girl Gloria Steinem (an avowed Wonder Woman fan) or perhaps Ms. Marvel who is described as resembling Ms. Steinem in the text. The thrust (pardon the expression) of the illustration, however, is clearly Wonder Woman’s breasts! 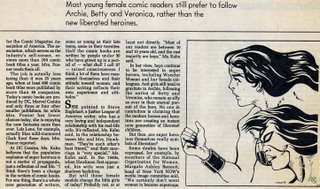 Talk about a double standard.
It was all an illusion anyway as 1978 soon gave way to the modern age of comics "artists" tracing heroines in explicit positions from skin mags and then drawing tiny costumes on them that would undoubtedly shock and/or delight Leonard Darvin!
I can be as sexist as the next guy but women deserve better. 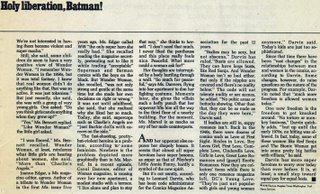 Every time you have a strong female comic character some writer has to screw it up. To me, the ultimate female role model in comics is probably Sue Richards. She is a mother figure, a lover, a nurturing, caring heroine and quite frankly the most powerful member of the Fantastic Four. So what happens? Well, right off the top of my head, there was that time Marvel made her into a whacked out dominatrix figure with split personality issues or that time when she decided to have an affair with Prince Namor... And they continue to wonder why girls don’t read comics!
Posted by Booksteve at 8:10 PM